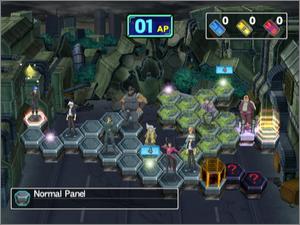 The hexagonal map used in the game.

Within the game, the player can choose to play as a male or female character, thus determining their starter Deck:

The game takes place in the island Ragnarok, where there is a building called Yggdrasil. The island has been taken over by an evil mastermind, Surtr.

On the island, the player battles the Duelist Corps, whose identity and motive are revealed as the game goes on.[2]

When the player finishes Story Mode, they are allowed to access the Niflheimr area. Niflheimr has no opponents other than Transcenders, but players can unlock new opponents in Free Duel Mode every 2 floors they finish, and they can also find the entries of a journal that detail the backstory of the Ragnarok island and the story of a group of people who arrived to the island long before the game's storyline took place.

The game includes characters from the anime and characters exclusive to the game.[2]

A set of three promotional cards are included with the game. These cards were used by Devack in the Yu-Gi-Oh! 5D's anime[3] and are as follows:

The following are only mentioned in the Japanese credits of the game.