From Yugipedia
Jump to: navigation, search
For the organization in Yu-Gi-Oh! ARC-V, see Sector Security (ARC-V).

The true goal behind the bureau is to prevent the evil sealed in the Nazca Lines by the Crimson Dragon from being reborn. They attempt to do this by cleansing evil from New Domino City, which Rex Goodwin believes to be the only present day utopia. This is done by keeping unworthy people out of New Domino and forcing them to reside in the run down Satellite.

Sometime after Z-one's defeat, the organization is abolished as New Domino City switches to a government of elected officials. It is replaced by the New Domino City Police Department. 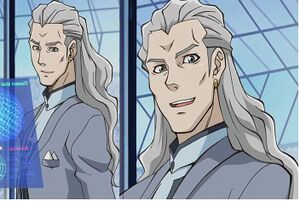 Sector Security is led by a director.

There are several different Sector Security directors throughout the course of the Yu-Gi-Oh! 5D's anime.

Security officers are permitted to use the otherwise banned card "Gate Blocker", which prevents the opponent from utilizing Speed Counters. The officers otherwise use an array of Trap Cards.

Named officers Tetsu Trudge and Kaz have been shown with other cards, indicating that they may personalize their Decks.