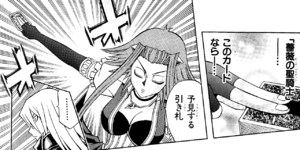 Foresee Draw ( Foresse Dorō) is an ability Akiza Izinski possesses in the manga. Using it she is able to predict what card she is about to draw.[1]

Akiza always uses this ability during her Duels, predicting correctly the card she is about to draw.[1][2][3]

During her Duel with Sherry LeBlanc, Akiza used this ability to counter Sherry's Hand Scan ability. As Sherry would check the card Akiza had in her hand as soon as she looked it and discard it via the effect of her "Mokusatsu", Akiza used her Foresee Draw to predict what card she was going to draw, and thanks to that, she didn't need to look to the card. By that way, Sherry wasn't able to scan Akiza's hand through Akiza's vision, and Akiza could save her card. However, Akiza was hesitating to use this ability in a Turbo Duel; it's dangerous, once Akiza closes her eyes when foreseeing her draw, which can cause her to crash with her Duel Runner. However, she was able to keep on the course due to the help of her friends in the auditory.[4]