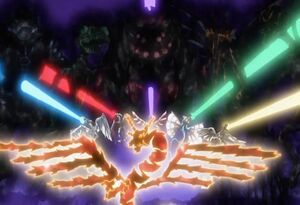 The Crimson Dragon and its servants battling the Earthbound Immortals.

The Nazca battle which took place in the third Millennium B.C., consisted of the Crimson Dragon battling the wicked gods, who came to be known as the Earthbound Immortals.

The People of the Stars' lived in the Inca civilization, the Stairway to the Dragon Star, under the guidance of the Star Dragon King. However the wicked gods threatened their lands. Seeking help the King prayed to their God, the Dragon Star for salvation. The Dragon Star responded by sending the Crimson Dragon to fight the disturbances.

The Crimson Dragon fought the wicked gods, with the help of five of its servants. They forced to the Gods into the earth, sealing them in geoglyphs, which came to be known as the Nazca Lines. However, as the Uru was sealed it sent out a web at Ancient Fairy Dragon and dragged her in with them.

5000 years later, as Rex Goodwin told some of the story to Yusei, Luna had a dream about the battle.

The Dark Signers tried reliving that battle as the Earthbound Immortals possessed them to fight the Signers, the modern day wielders of the Crimson Dragon's servants.