Like all "Earthbound Immortals", "Ccarayhua" is a gigantic black, exaggerated animal with a secondary color; "Ccarayhua" is a lizard with a green secondary color. "Ccarayhua" is one of the tallest "Earthbound Immortals", reaching most of the way up a skyscraper. "Ccarayhua" has an exaggerated head; a large ellipse with a lipless green-toothed mouth running around the circumference, two bulging green eyes on the top of the head, and an asymmetrical green design on top, weaving around and between the eyes. Its shoulders and hips have dull spikes protruding from them, and while its gait is saurian overall, its arms are very humanoid, with five, clawless grasping fingers that bulge at the tip like suction pads. "Ccarayhua's" tail is held suspended above the ground; it does not drag.

Earthbound Immortal Ccarayhua was one of the Earthbound Immortals who participated in the battle with the Crimson Dragon 5,000 years ago, where it was defeated and sealed in the Lizard Nazca Line. It is presumed that it serves Red Nova.

Ccarayhua's Mark of the Shadows resurfaced 5000 years later, choosing Misty Tredwell, who bore a grudge against Signer Akiza Izinski, as its host. It appeared to Misty as she was being rushed to hospital after a car accident that she had inadvertently out of despair over her brother's death (disappearance in the dub). Misty saw "Ccarayhua" leaping towards her, entering her body and instructing her to kill the Black Rose, a servant of the Crimson Dragon.

After sensing the transformation of Carly Carmine into the fifth Dark Signer, Misty went to the Arcadia Movement building to Duel Akiza. She explained her possession to Akiza during the Duel and brought out "Ccarayhua" at the climax of the match. "Ccarayhua" was Summoned outside the building and powered by the spirits of hundreds of New Domino City citizens, reaching most of the way up it and peering in at Akiza. However, it was unable to attack, as Carly Summoned her own "Earthbound Immortal" in her Duel with Sayer, "Earthbound Immortal Aslla piscu", which destroyed the building and forced Misty to retreat. The two "Earthbound Immortals" were dragged back to the Netherworld as a result. 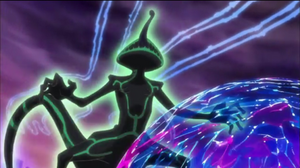 Misty used "Ccarayhua" during her second Duel with Akiza; Summoning it after her "Sad Story" strategy had been disabled. During the Duel, Yusei Fudo tricked Sayer into admitting that he, not Akiza, had caused her brother's death. Misty ordered Sayer to admit his crime, and he did so; Misty subsequently had "Ccarayhua" devour Sayer, snatching him up in its tongue. Her vengeance sated, Misty attempted to forfeit the Duel, but "Ccarayhua" possessed her and forced her to continue. Akiza was able to destroy "Ccarayhua" with the effect of "Black Rose Dragon", and block the effects of the possessed Misty's "Doom Gazer" with "Nature's Reflection", defeating Misty and freeing her from "Ccarayhua's" possession.