Jerry Beans Man first appeared when Jesse shared a story with Jaden that took place before he acquired the "Crystal Beasts". He had found a young boy after he was mugged, following the spirit of a "Jerry Beans Man" card. During Trapper's Duel with Jesse, Trapper trapped some of Jesse's Crystal Beasts and threatened to rip the "Jerry Beans Man" card that he stolen from a boy named Tom, who was the boy Jesse knew. Luckily, Jaden came to rescue and saved the spirit, allowing Jesse to claim victory.

The spirit later appears in groups in the Duel Monsters Spirit World in episode 132, attacking multiple Garuda the Wind Spirit and Kurama, alongside other oppressed Duel Monster Spirits.

Jerry Beans Man appears as one of the first 3 Duel Monster Spirits the player can obtain as a partner. If not obtained at first, it can be later found in the Forest and the Dried Well.

Jerry Beans Man's ability gives the player a slightly higher chance of obtaining Deck Recipes from defeated opponents, with the probabilities improving as the spirit is levelled up. 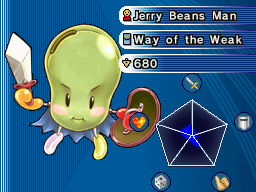 Jerry Beans Man is a Level 2 Limited Duel opponent that challenges the player to defeat it using a Deck with no monsters that are Level 4 or higher.

Jerry Beans Man appears as one of the 3 opponents the player can always duel in World Championship Mode.