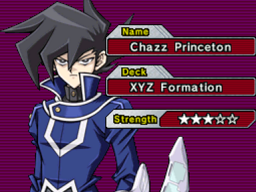 The player first faces Chazz by the Lake, having caught word of the player defeating two Obelisk Blue students. He develops a grudge towards the player after he loses, which becomes greater after a second defeat at the player's hand in the Duel Field.

After being defeated at the Lake a second time, he will leave Duel Academy, and he is not heard from again until the Interscholastic Duel, where he will Duel the player in a Match as North Academy's representative. After losing, Chazz will stay at Duel Academy.

Chazz will Duel the player for the fifth time at the Beach after Atticus is defeated.

After the player defeats Kagemaru, they can begin finding Chazz as an opponent around the Blue Dorm and in the Forest.

Chazz can give the player 1 copy of any of the following cards each time he is defeated.

Defeating Chazz multiple times can earn the player a replica of Chazz's Black Coat or his North Academy uniform.

Hey, <Player name>! I still think you're a slacker! I only let you register me so that I can duel and pummel you more easily! I'll wait for your challenge!

Hey! <Player>! Don't be thinking I respect you as a duelist! I'm only registering you because that makes it easier for me to duel you. I'll wait for your challenge!

Subject: The One and Only

Am I the only one you're dueling? Well, it would make sense. What better competition is there than the Chazz!

I've been wondering if, by any chance, you ever duel anyone other than me. Not that I'm complaining. Dueling you isn't half bad.