Amazoness Paladin, known as Amazoness Holy Warrior in the Japanese version, is the Duel Monster version of the card of the same name.

Amazoness Paladin appears briefly in a flashback when Tania explains how she and other denizens of her dimension unexpectedly switched dimensions in the Duel Monsters Spirit World.[1]

Amazoness Paladin is found at the Colosseum in the Grace Duel World. Here, the player can duel against her, with both the player and herself using Structure Decks. If they defeat her using all 13 Structure Decks available, they unlock Bastion Misawa as an opponent in Free Duel Mode. 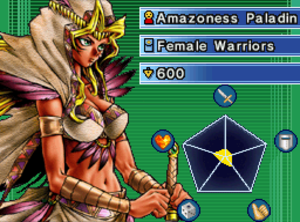