Yami Marik, known as Dark Marik in the japanese version, is a character in the Yu-Gi-Oh! World Championship series. This is a videogame version of Yami Marik. 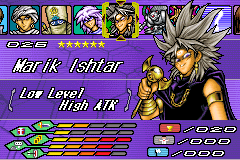 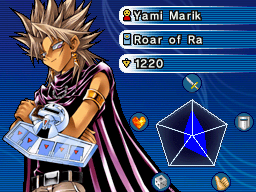 Yami Marik appears in the game as two different Ghost opponents. One is unlocked by connecting with Nightmare Troubadour, and the other one was obtained only through download.

Yami Marik is a Single Duel opponent unlocked by having a save file with at least 200 hours of play time. He also appears as a Tag Duel opponent, partnered with Yami Bakura, when the player wins a duel by the effect of "Destiny Board".