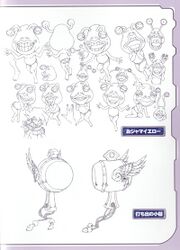 After Chazz's boat sank, he woke up in a submarine with the "Ojama Yellow" card. Since then its spirit came into contact with Chazz. It was only visible to him and few others, and the spirit often got on Chazz's nerves. Chazz tried giving it away to Foster, but the card refused to leave him. He later played the card against a North Academy student so it could get easily destroyed by his opponent, silencing the spirit for a while.[1]

During the school Duel between Duel Academy and North Academy, Jaden Yuki was able to see Ojama Yellow pestering Chazz during the Duel.[2]

Ojama Yellow told Chazz of his long lost brothers, shortly before Chazz's Duel with Slade Princeton. Later that day, Chazz entered a well where students had dumped weak cards, as he required monsters with less than 500 ATK for the Duel. Inside the well, Chazz found Ojama Green and Black, reuniting the brothers. The brother proved their strength in the Duel, as Chazz used "Ojama Delta Hurricane!!" to win.[3]

At the start of the year Chazz was now fully respectful of his Ojama cards, claiming his opponent Reginald Van Howell III to be just like he once was; a cocky snob who only believed in power whilst dueling. He proves that power is nothing in comparison to strategy by destroying Reginald's "Gilford the Legend" with "Ojama Delta Hurricane!!" and using his Ojamas to prevail. However Chazz was eventually brainwashed into the Society of Light, believing the Ojama's to be weak, he tossed away their cards off a cliff. Jaden was saddened to see Chazz had ditched his Ojamas and took it on himself to find them. Jaden managed to save the trio from a crab. After talking with them, he added them to his Deck to face Chazz in the hopes of returning Chazz to normal. Jaden managed to restore Chazz's old-self in the Duel, but Chazz accused Jaden of stealing his cards. Chazz managed to move the Ojamas to his side of the field, but lost the Duel in the process. The Ojamas then sided with Chazz and also accused Jaden of stealing them.[4][5]

During the quest for "Rainbow Dragon" Chazz is eventually turned into a Duel Ghoul along with his three Ojamas. When Chazz gets sent to the different dimensions away from Duel Academy, Yellow sticks by him up until Chazz dies, with Black and Green going with him ("sent to the stars" in the dub, though death is still heavily implied). He ends up in the company of Syrus Truesdale, serving as a pseudo-spirit partner for him, up until the end of the duel between Jaden and Yubel. When Jaden fuses his soul with Yubel, Yellow and Syrus are sent back and both return to Duel Academy, thus Chazz and Ojama Yellow are reunited. 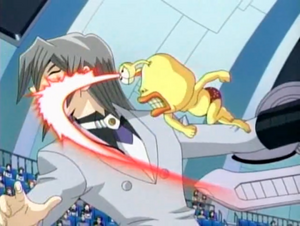 In his last year of Duel Academy, Chazz trains to become a Pro Duelist under the tutelage of Aster Phoenix. They eventually end up in a heated Duel, and Chazz defeats Aster using Ojama Yellow, and calls him his "ace card", which makes Ojama Yellow cheerful.

In the English dub, Ojama Yellow's voice and mannerisms are similar to Larry of the The Three Stooges; his brothers Green and Black talk like Curly and Moe, respectively. In the Japanese version, they talk like Japanese wannabe gangsters, call Manjoume "aniki" and use the honorific "dono" (殿) for Judai and Sho. In the European Spanish version, he calls Chazz "jefe" (boss).

Ojama Yellow is a Level 2 opponent. 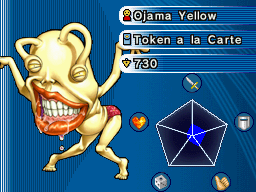 Ojama Yellow is a Level 2 Theme Duel opponent that challenges the player to summon at least 10 Tokens in one duel.

After the player has ran into Ojama Green and Ojama Black, Ojama Yellow can be found in the Civilization Duel World, being attacked by Blowback Dragon. Defeating Blowback Dragon and rescuing Ojama Yellow unlocks both characters as opponents in Free Duel Mode. 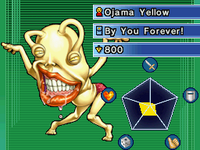 Ojama Yellow appears as a Single Duel opponent, and it is one of the 3 opponents that are unlocked since the beginning of the game. 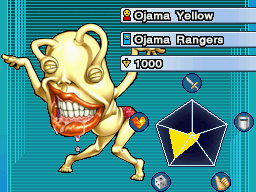 Ojama Yellow in Reverse of Arcadia.

Ojama Yellow is an unlockable opponent for Single Duels. It is unlocked when the player finished Story Mode's Chapter 4.