Lava Golem is a character version of the card, "Lava Golem". 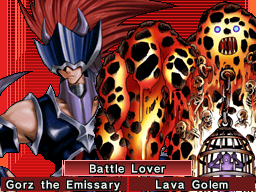 Lava Golem appears as a Tag Duel opponent in Free Duel Mode, partnered with Gorz the Emissary of Darkness as the Battle Lover Tag Team. They can be unlocked when the player beats 20 Tag Teams 5 times each.