Regulus is the Duel Monster Spirit of the card "Regulus" and servant to Ancient Fairy Dragon.

Regulus is a White Lion, who Luna and Torunka join forces with in order to free Ancient Fairy Dragon.

During the fight between the Signers and the Dark Signers, Luna goes to the Spirit World, where she finds Regulus, in order to free Ancient Fairy Dragon from the seal she has been put under. Eventually Luna is able to find the White Lion in Pojar Forest with the help of a spellcaster spirit named Torunka. However, Regulus doesn't act too friendly with Luna or anyone else for that matter. According to what Torunka told her, Regulus is dealing with the issue of not being able to save Ancient Fairy from her Rock Stone sealment. Its behavior is also being caused by the effect of the Cursed Needle around its ankle.

She tells the Lion of the promise long ago made to Ancient Fairy, however because of the cursed instrument, he understands her on the opposite way. After some following events, Luna is finally able to dispose of the Needle and convince the White Lion of her righteous intentions by showing him her Mark of the Dragon. Luna learns that Regulus is actually the one who called for her as he had already heard of her existence long ago from its master and as such, has been fighting ever since waiting for Luna's return to the Spirit World. Regulus tells her that the one responsible for Ancient Fairy Dragon's sealing is none other than King Zeman.

In order to set her free, Regulus, Luna and Torunka set off to Zeman's castle. They are able to get inside by tricking Zeman into thinking they are servants and have captured an "unsuspecting" Regulus. Also they make Zeman believe that the only way for the King to minus Ancient Fairy completely is to release it first and then place the Curse on both master and servant, thus to that deceitful reason the Monkey King completely falls for.

Torunka accidentally reveals the plot, resulting in a chase and the group getting separated. The two find Regulus after he destroys Zeman. Luna is taken back to the real world to take over for Leo, and after she plays "Respect Synchron", Regulus jumps to the real world briefly to free Ancient Fairy from her chains, then goes back. He later becomes a card for Luna to use in her Deck as a way of repaying her.

Regulus shortly appears along with Kuribon in the forest outside Haley's house, as they are worried for Luna who has been guided into the forest while being in some sort of trance.

He shortly appears to aid Luna, after she gets blown by an attack made by Lester to her "Bird of Roses". As Regulus appears flying and just in time to catch her and land her back safely to the riding lane. After "Mekord Emperor Skiel" is Summoned, Regulus appears before her and warns Luna of the power Lester posesses. Later in the Duel, Lester commands Skiel to attack Luna directly. The spirits in her Deck take the brunt of the blast and Luna skates out of the smoke unharmed. She thanks Regulus and the spirits for their help. 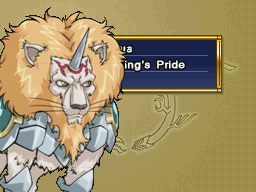 Regulus, in Over the Nexus

In Yu-Gi-Oh! 5D's World Championship 2010: Reverse of Arcadia, Regulus plays the role of being one of the bosses within the Spirit World. After the player, Torunka and Luna find him, the player finds out that he has a Minus Curse and must Duel him in order to distract him long enough for Luna to destroy the minus staff attached to his leg.

When the player returns to the Spirit World, they find out that Regulus has been captured by Zeman, so they go to his castle in order to defeat Zeman once and for all. After the player defeats Zeman, Regulus runs in and destroys him using a Minus Staff, freeing Ancient Fairy Dragon in the process.

After the storymode, he is available to Duel in the forest passageway within the Spirit World, which the player can go to by talking to Luna in the New Domino square.

In Yu-Gi-Oh! 5D's World Championship 2011: Over the Nexus, Regulus can be found in the Spirit World after finishing the game.