Earthbound Immortal Cusillu was one of the Earthbound Immortals who participated in the battle with the Crimson Dragon 5,000 years ago, where it was defeated and sealed in the Monkey Nazca Line. It is presumed that it serves Red Nova.

Cusillu's Mark of the Shadows resurfaced 5000 years later, choosing Devack, who bore a grudge against the Signers, as its host. 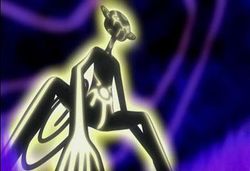 Devack eventually Summoned "Cusillu" during his Duel with Leo after "Zeman the Ape King" was destroyed in both the Duel and the Duel Monsters Spirit World; using the Duel Monster Spirits that "Zeman" had captured in order to fuel itself. "Cusillu" easily overpowered the struggling Leo, though he was able to keep his "Power Tool Dragon" in the Duel. Luna returned from the Spirit World and took over the Duel from Leo, and Devack Summoned "Ancient Fairy Dragon" in order to taunt her, further discarding it to activate the effect of "Cusillu" and prevent its destruction. 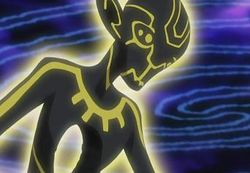 The hole in the weakened "Cusillu".

Unfortunately, this proved to be both his and "Cusillu's" undoing, as Luna revived "Ancient Fairy Dragon" with "Respect Synchron" and used its effects to destroy Devack's "Closed Forest" Field Spell Card, robbing "Cusillu" of its effects. Luna combined "Power Tool Dragon" with "Rocket Pilder" to weaken "Cusillu", blasting a large hole through its chest, before destroying it and defeating Devack with "Ancient Fairy Dragon".