Larry, known as Shizaki in the Japanese version, is a character in Yu-Gi-Oh! 5D's. In the English version of Yu-Gi-Oh! 5D's Tag Force 4, he erroneously is called Lenny, which is the name of one of his friends.

He is often with Lenny, standing at his right side, and Lug, who stands at his left.

He is never shown speaking in the Japanese anime. Instead he sniggers, making the noise shi-shi-shi. He makes the same noise, only slower, when he is unsure of the situation. In the dub, his laugh is changed to a more conventional one.

Larry hung out with Lenny and Lug at a Satellite factory where they bullied Tank, Nervin and Blitz and beat them up. After that they had their salaries at the factory cut, so they went to confront Tank, Nervin and Blitz at Yusei's hideout. However, Lenny ended up Dueling Yusei hoping to win his Duel Runner. Lug and Larry watched the Duel, cheering for Lenny.[1]

During Yusei's Duel against Z-ONE he was seen cheering on Yusei.

Larry is erroneously called Lenny in the localized versions of the game. He hangs out at the shoreline, and is able to reset the player's relationship with any character to 0 if asked, allowing players to replay storylines. He also offers the option to prematurely unlock the ability of editing the Deck of the player's current partner by paying him 10,000 DP, as well as allow the player to view alternate versions of characters if they have met the necessary conditions. 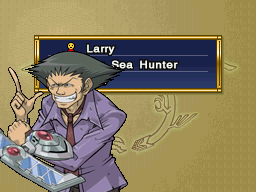 Larry, in Over the Nexus

In line with his laugh being his most notable characteristic in the original, the names of Larry's Decks are plays on it.