Shira is one of Rex Goodwin's five Dueling Assassins that he placed in the Fortune Cup with the intent of exposing the Signers, as well a member of Iliaster. It is said that Duelists who challenge Shira never Duel again, out of fear. 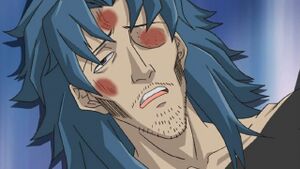 Shira is almost always cloaked in an indigo cloak that covers his body, with flame-like extensions on his shoulders. When his face is revealed it is revealed he has spiky blue hair.

Some of his opponents call him Shinigami Reborn. This is further referenced by the "Dokuroyaiba" card he owned, whose Japanese name contains "Shinigami". 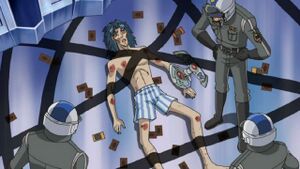 Shira after being ambushed and having his cloak stolen.

Shira was a participant in the Fortune Cup, to be paired up against Yusei Fudo for the third match. As he was getting ready to make his way to the stadium, he was told by Lazar he needed to cause as much pain as possible in order to gather data, however he was warned to not let his guard down as Yusei was the man who had defeated the King. Overhearing Hunter Pace's reaction, he threw a "Dokuroyaiba" into the closet Hunter was concealed in at him and struck him in the helmet. Seeing nothing but a mouse run out he dismissed it as not a threat and continued on with Lazar. At some point later before his match, he was ambushed and had his cloak stolen by Hunter, who disguised himself as Shira, in order to Duel Yusei in the next match.