Elsworth, known as Mizoguchi in the Japanese version, is Sherry LeBlanc's caretaker.

Elsworth has short, spiky, dark grey hair and blueish eyes, with thick eyebrows the same color of his hair. His sideburns grow down to the top of the cheekbone before slightly growing to a point in the direction of his nose. His face is almost always in a scowl, regardless of his actual feelings.He is tall and has a muscular body. His outfit consists of that of a traditional butler.

Elsworth's custom-built Duel Disk is multi-functional, containing a built-in parachute, a sword and possibly other tools as well.[1]

Elsworth has a humble and loyal personality. He cares very much about Sherry's safety, and is willing to put himself at risk for her. He is also more merciful, shown when Sherry threw a person out of a building and he caught him, telling her she shouldn't scare someone like this.[2] However he is not above fighting back if someone attacks Sherry.[3]

Elsworth worked for the LeBlanc family. After they were murdered (kidnapped in the dub) by Iliaster, Elsworth guided their daughter Sherry safely out of the mansion. 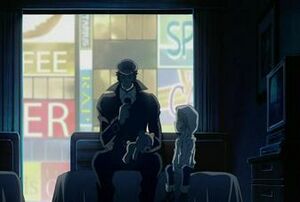 They hid out in a hotel, where Elsworth unsuccessfully tried to cheer Sherry up. He continued to take care of Sherry and often moved to hide from Iliaster.

The two of them moved from France to England to various parts of North America to an island in the Pacific to Japan. The whole time, Sherry hung onto a teddy from her home in France. In Japan, Elsworth found out there had been a card hidden inside the teddy.

Elsworth tips off Yusei Fudo's friends about his abduction and provides them with his location. When Akiza Izinski rescues Yusei from his confinement, Yusei is forced into a Turbo Duel against Sherry, with Akiza on the back of his Duel Runner, Elsworth begins to follow them on his Duel Runner to observe their duel. Later, Boss interrupts the Duel in a failed attempt to kill the three of them. As Boss' plan fails due to Akiza's interference, Elsworth prevents Boss and his goons from escaping the scene by beating them up.

Elsworth accompanies Sherry in her quest of finding out the mystery behind the "Z-ONE" card. In an attempt to do so, the two of them break into Sector Security's HQ. He calls Tetsu Trudge and warns him that their is a bomb inside the building, and when Trudge didn't believe him, Elsworth along with Sherry set a dud bomb off in order to scare the staff out of the building and cause a shutdown ensuring them safe passage to a card reader in the building to identify the "Z-ONE" Spell Card Sherry's father entrusted to her. Further inside the HQ, Sherry and Elsworth run into Yusei and Bruno. Yusei and Bruno try to follow after her. However, Elsworth blocks Yusei's path, only for Bruno to go after Sherry. Elsworth then Duels Yusei to buy her some time. Elsworth gains the upper hand in the beginning of the Duel a combination of "Driven Daredevil" and "Master and Servant's Resolve", though Yusei is able to defeat him with "Stardust Dragon" nevertheless. After the Duel ends, they both follow to where Sherry and Bruno are.

Once in the room, Sherry, Bruno and Yusei are transported to a cyber-like plane. After this, they all wake up on a lake shore along with Elsworth. He then leaves while carrying Sherry, who mysteriously appears to be unconscious. 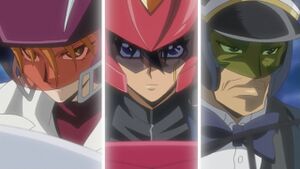 Elsworth teams up with Yusei and Sherry to stop the Diablo.

Elsworth is part of Sherry's two-man team, as they could not find a third person after Yusei rejected their offer. He participates in the Battle Royal against Diablo in which he is eliminated after a good attempt of stopping them by summoning his ace monster along with Yusei and Sherry, this is because Primo sends more Duelbots after them due to them stopping the destruction of the small groups of the Diablo.

After he along with Sherry are defeated by the Diablo, he finds Sherry unconscious on the Duel Lanes and wakes her up. They are then both seen observing the duel between Primo and Yusei, cheering Yusei on. When "Meklord Emperor Wisel" causes the weather to go out of control, he protects Sherry from the hurricane and thunder by holding her close. They are then both seen observing "Shooting Star Dragon" stop Primo's wrath. When Yusei defeats Primo, Elsworth and Sherry both attempt to stop Lester and Jakob but fail when both their Duel Runners are destroyed and they are both thrown off the New Domino City Monument, he then uses a parachute installed within his Duel Disk in order to fly them to safety. 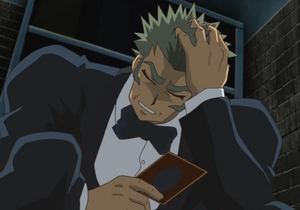 A devastated Elsworth holding the "Z-ONE" card after Sherry's disappearance.

After Yusei, Bruno, and Sherry found information about Momentum Express Development Organization and Iliaster, the Pure Nobles falsified history to remove/alter all information and evidence about Momentum Express among other events, but Elsworth is protected from the alterations due to him being in close proximity with the Signers when the alteration wave occurs. Later after Yusei and Bruno return to New Domino City in their pod from Momentum Express Development Organization, Elsworth is shown holding the "Z-ONE" card while thinking about Sherry, who disappeared in between dimensions. He then runs upstairs to see the effects of the time alteration and is shocked to see that Team Sherry has been removed from the WRGP and has been replaced by Team New World. He then leaves Yusei and his friends, telling them that he is going to search for Sherry. He is then seen to be driving a new version of his old, destroyed Duel Runner.

When the Divine Temple appears and Sherry reappears, Elsworth gives the "Z-ONE" card to Crow before the Signers attempt to invade the stronghold, with Crow promising to return the card to her. After Team 5D's, along with Sherry arrive at the Center Gear and Yusei Duels Z-one, Elsworth makes another appearance in the Security building, watching the fight. When MC arrives there, Elsworth increases the volume so that the MC is able to speak to all of New Domino City's residents. He is then seen observing Yusei's Duel with Z-one for the fate of not only New Domino City but the future. When Yusei falls off his Duel Runner, Lazar tries to save Yusei but Elsworth stops him by pulling him back. He then continues to cheer Yusei on when he Summons "Shooting Quasar Dragon" and defeats Z-one. 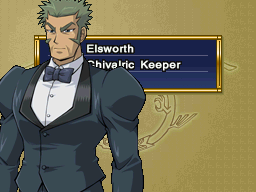 Elsworth, in Over the Nexus

Elsworth appears as an opponent in Yu-Gi-Oh! 5D's World Championship 2011: Over the Nexus.

He also makes appearances in Tag Force 5 and Tag Force 6 during several of Sherry's story events.

Elsworth uses a Bushido Deck, focused around his ace monster, "Driven Daredevil" with cards such as "Master and Servant's Resolve".