The Familiar and the Red Nova implanted a dream in Greiger, where he saw Jack Atlas die, by relying on power. As a result, Greiger invited Jack Atlas to the Nazca region in the hope of overcoming this. He got Jack to Turbo Duel against Max. However, the Familiar possessed Max and changed his Deck. The Duel was halted when it became clear the Crimson Devil was at work.[1] 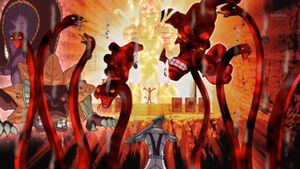 The Familiar facing Jack in the ritual Duel.

When Jack arrived at the top of the shrine, he was transported to a hidden chamber. The Familiar told Jack that his master is locked away and has been waiting for Jack. Jack demanded the power and the Familiar offered it, under the condition that he and Jack perform the contracted ritual; if Jack defeats the Familiar in a Duel, the Devil will grant him overwhelming power. Jack agreed. Yusei, Greiger and Max followed Jack with Greiger informing Jack how they had all been used. However the ritual Duel had already begun as planned and the Familiar revealed that if Jack loses, his body will become host to the Crimson Devil and his friends will be fed to his master in the sacrifice.[2]

The Familiar used a "Yomi" Lock strategy, which countered Jack's power strategy. Jack developed new tactics to fight back. When both players Life Points were low, the chamber began to fall apart and the Crimson Devil started to appear. However Jack used "Blazing Soul" to absorb Red Nova's power and create the card, "Red Nova Dragon", which he used to defeat the Familiar. The statue of Red Nova then fell over crushing the Familiar.[3] 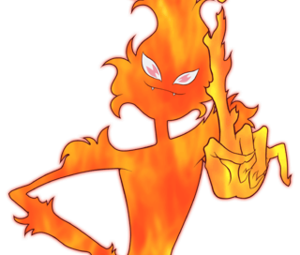 The Familiar of Red Nova in Tag Force 6

The Familiar of Red Nova can be found in the Outer Rim at night, inviting the player to enter the Night Tournaments.

The Familiar's most used power is his ability to possess people. It has been used on Greiger, Max and a villager in the series.

Another ability is to fire energy blasts from his hand, which he used to destroy the stairs and the exit to the Earthbound Immortal Shrine and to knock Yusei off his feet.

He was also able to destroy the floor surrounding Jack, trapping him in the center of the room, unable to reach anyone outside of the duel.

The Familiar uses a "Yomi" Deck. It uses cards that quickly inflict effect damage while protecting himself with various stall effects. It consists of low Level Fiend-Type monsters that can be quickly destroyed to inflict damage.

Instead of cards, the Familiar uses tablets, similar to the tablets used in Ancient Egypt, which had monster Ka sealed inside them.

The Familiar took control of Max and Greiger to lure Jack Atlas into a Duel, where he used this Deck. It was given to Max by the Familiar whilst under its control. The Deck is centered around putting multiple monsters with the same name in the Graveyard to benefit from cards such as "Smoke Mirror" and "Ancestor Bird".