From Yugipedia
Jump to: navigation, search
For other versions of this character, see Sayer (disambiguation).

Sayer, known as Divine in the Japanese version, was a man with psychic abilities similar to those that Akiza harbored as well as the leader and the founder of the Arcadia Movement. He was a secondary antagonist during the late parts of the Fortune Cup Arc and during the entire Dark Signers arc. He was a powerful Psychic Duelist, who was in control of his powers at all times. An alternate version of Sayer appears in Yu-Gi-Oh! ARC-V.

Sayer was extremely ruthless, and even allowed innocent children to be electrified to death simply because they did not meet his expectations.[1] He also was very manipulative, and used Akiza for her powers[2] and was able to evade Sector Security thanks to his information on Rex Goodwin.[3] Although his past was never explored, he wanted revenge against society for having discriminated him.[4] he was also very deceiving as he could make himself seem like a decent human being if not a credit to the human race

Sayer, as a Psychic Duelist had the ability to manifest his cards as real objects. This was made apparent when he used "Psychic Sword" and "Hinotama" to fend off and almost kill Yusei if it wasn't for Misty who overheard the Duel via Yusei's hand-crafted Duel Disk, and thus Misty had killed him with "Earthbound Immortal Ccarayhua".

He also had the ability to easily manipulate people by using their past against them. Good examples of these were Akiza Izinski and Rex Goodwin who both had pasts that they didn't want to be brought to attention, thus Sayer used these weaknesses against them and cleverly used them to do his bidding.

When he found Akiza for the first time, he welcomed her into the Arcadia Movement, a group of people with powers that were similar to hers. Sayer was the leader of this group of Duelists who trained to control and harness their psychic abilities. He had plans for her to be a member and a representative figure of the organization.

Sayer found Toby Tredwell, who also had Psychic Dueling powers and took him to the Arcadia Movement to test his abilities. Toby was unable to withstand the procedure. Believing him to be weak and useless, Sayer ordered the intensity of the electric shocks to be amplified, which caused the young boy's death (in the dub, Toby was taken to a another location under Sayer's orders). 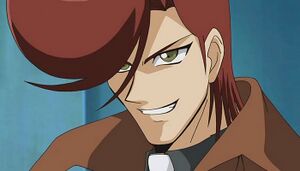 Sayer, as he appeared during the Fortune Cup arc

Sayer watched over Akiza's Duels in the Fortune Cup and encouraged her to be proud of her powers. He also did his best to keep Akiza secluded from anyone outside the Arcadia Movement, including Lazar and Yusei. When she lost to Yusei, he lead her out of the arena to recover from her defeat before Yusei had a chance to speak to her. However, Sayer returned to watch the final match to see if the Crimson Dragon would appear. During this Duel, he commented that it would be interesting to watch. 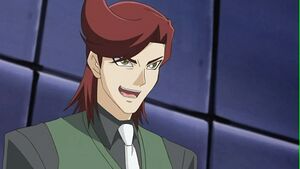 Sayer during his Duel with Leo

Later, he received a message from Bolt Tanner, who requested that Sayer help the Signers against the Dark Signers. Luna, Leo, Yanagi and Tanner went to the Arcadia Movement to attempt to unite all of the Signers against the Dark Signers, however, even after explaining the current situation to Sayer, it appeared that he already had other plans. As he and other members sedated them with gas, Sayer looked at the sleeping Luna, and said that he was thinking of making her a member eventually, which indicated that he had been planning it for some time prior to the meeting.

When the gas wore off, Sayer had chained Leo in his Duel arena to personally test him for any Psychic power while Luna and Akiza watched from the observation room. Before the Duel began, Sayer explained that Luna had the Ability to talk to Duel Spirits, and since Leo was Luna's twin, he might have had special abilities of his own.

He continued by saying the Arcadia Movement had no interest in dealing with the Dark Signers and that he wanted to use his Psychic Duelists, as soldiers to start a war against the world.

During the Duel, he attacked Leo directly with "Krebons", which caused Leo to cry from the pain. Sayer, however, told him to get up, and that he didn't know where he stood. To add to the pressure to unlock any potential psychic power in Leo, he threatened that Leo's life was at stake because he had revealed his true intentions before the Duel began. Leo fought back by Synchro Summoning "Power Tool Dragon", and inflicted major damage to Sayer, who commented that Leo's move wasn't too bad. However, after saying that, he applauded Leo for giving him such a hard time, Sayer emerged victorious as he used an impressive card combo that ended with "Battle Teleportation", which allowed him to attack Leo directly with "Thought Ruler Archfiend".

The attack threw Leo hard against the floor and knocked him out. Sayer accepted that Leo had no special powers, and considered him a worthless drag. However, after the Duel, Sayer assured Akiza that he would not put him through any more harm. Instead he said that he planned to convince him to join the movement, and that by doing so, perhaps Luna would come to understand them (Which indicated that he was going to use Leo as a member, so Luna had a reason to stay).

After his Duel with Leo, he spoke to Akiza about the organization's plans of gathering more members from around the world. Also, that she would come to represent the Arcadia Movement itself not only as a symbol, but also as a modern "Joan of Arc".

Meanwhile, Carly Carmine had snuck into the Arcadia Movement building and found Sayer's secret room, which triggered Sayer's psychic sense. He returned to his office and challenged Carly to a Duel with her life on the line. Carly Summoned 3 of her "Fortune Fairies" and raised their ATK to 3000 each. However, Sayer swarmed Carly with Psychic monsters and destroyed her key card with "Psychokinesis" and pinned her to a window with his attacks.

Carly warned Sayer that the Public Security Bureau would investigate her death, but he informed her that her death would be considered an accident by Sector Security. He explained to Carly that he knew Goodwin's weakness, that he was born from Satellite rather than in New Domino City and mentioned that that was the least of Goodwin's secrets, and because of that, he was safe from Sector Security. His last attack defeated her, shattered the window that she was pinned against, and lead her to her apparent death. (This was made less obvious in the dub, in which she fell into a purple fog, but still landed on the ground and cracked it).

Carly was revived as a Dark Signer and appeared to Sayer again in order to challenge him to a Shadow Duel for revenge. He started the Duel confident that he would win again, but Carly was able to destroy his first monster and more than half his Life Points with ease on her first turn. Following this, Sayer attempted to make a comeback on his next turn and thought of a strategy which would have allowed him to bring out "Thought Ruler Archfiend", but this was futile because on her next turn Carly Summoned Earthbound Immortal Aslla piscu and used it to defeat Sayer. 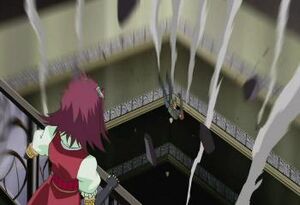 The explosion caused by the attack threw Sayer down the building's stairwell. Akiza saw Sayer falling and cried out for him in shock. (In the dub, Sayer fell into the same purple fog that Carly fell in.) Afterwards, the Arcadia Movement building began to collapse after the attack of "Aslla piscu". 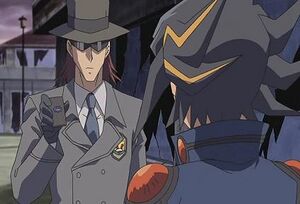 Sayer disguised as a security agent

Sayer somehow survived his fall with a scar on the right side of his face that was hidden by his hair, which also changed to a more rough style. He posed as a security agent from Goodwin, tricked Mina into a water pit, and attacked Yusei, who eventually ended up with Mina.

After he saved Akiza from landing into a shard of shattered glass, he told her to continue the Duel with Misty. But as Akiza told him that she couldn't, Sayer revealed to her that psychic powers were strong even when they were dormant while she was young. He had somehow sealed them away without her knowing this.

Sayer released the seal, and unlocked her true powers with the phrase "The entrance to the Underworld is on the witch's island" Akiza's powers awoke and she became the Black Rose once again. Sayer claimed that this power had surpassed that of the Dark Signers. While Sayer watched the Duel from someplace safe, he stated that he and Akiza would resurrect the Arcadia Movement. 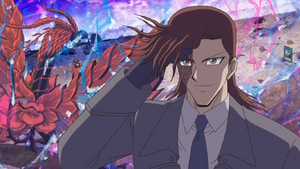 Sayer revealing his scar to Yusei

Yusei confronted Sayer and asked what he was really there for. Sayer revealed his scar, and stated that it was a result of the Dark Signer's attack on the Arcadia Movement's headquarters. Sayer claimed to have control over Akiza's mind, and he said that she would only obey him. Yusei commanded him to release Akiza, and stated that she had changed. Sayer refused and attacked Yusei with "Hinotama".

Sayer stated that anybody who fell prey to him, would simply follow his orders and nothing more, as he took full advantage of that individual's weakness, just like he did with Akiza. Although at that time, he acknowledged her incredible psychic powers along with her loneliness.

He explained that Misty had became a Dark Signer, because of what happened to Toby. This lead Yusei to figure out that Sayer was involved in Toby's death. Sayer revealed the truth of Toby's death, which prompted Yusei to attack him, but Sayer avoided him and attacked again with "Hinotama". Yusei was left hanging from a balcony, but laughed as he revealed that he had activated his Duel Disk's voice intercom, and thus allowed Misty to hear the real story of her brother's death. 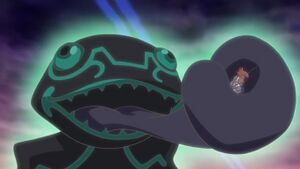 After she heard this, Misty believed that Sayer was the real culprit for her brother's death. Sayer unwisely told her that Toby was too weak and that he had no use for him anyway. Fueled by anger and lust for revenge, Misty ordered "Ccarayhua" to eat Sayer (in the dub, he simply disappeared after "Ccarayhua" took him).

According to the Yu-Gi-Oh! 10th Anniversary Animation Book, Sayer was revived after "Ccarayhua" was defeated, and was quickly arrested by Sector Security and sent to The Facility after the fall of the Dark Signers and the King of the Netherworld.

Sayer used a Psychic Deck, which focused on Summoning and supporting Psychic-Type monsters at the cost of his Life Points.