Dr. Fudo was Yusei Fudo's father and the husband of Mrs. Fudo, whose spirit had dwelt within the old Ener-D Reactor.

Dr. Fudo's personality was much like his son, Yusei's. He was also described as very strict by Yusei.[1]

He was the lead developer within R.R.D.'s Ener-D Reactor who was killed in the Zero Reverse. His leading position of R.R.D. was due to the fact that he was the leader behind the research into the "Planetary Particle", which 17 years ago was the particle needed for the development of the Ener-D technology.

This research consisted on the planetary gear which was one that was able to bind particles to others. Dr. Fudo named his son, Yusei Fudo, in honor of this particle, which was named Yuusei Ryuushi, as he wanted his son to be able to bond people together.

Rex Goodwin mentioned him just before Yusei and the others were about to travel to Satellite aboard a helicopter. He told Yusei that he and Roman Goodwin, Rex's older brother, were Dr. Fudo's head assistants.

Later on, Roman told Yusei and the others that Professor Fudo wanted to cancel the Ener-D research, as he already suspected that its rotation was quite unstable. Furthermore, he realized that there might be an accident (as it happened, he was right). However, its proposed cancellation was rejected by the City, which caused Professor Fudo to be removed from the project and replaced by Roman instead.

Soon after, Roman overrode the system which lead to the Zero Reverse incident. Dr. Fudo's last act was to save his infant son, Yusei, by ejecting him from the Ener-D development area in an escape capsule immediately before he was killed by the negative energy explosion. (In the English version, he had disappeared before the Ener-D reactor had begun to malfunction, which had released all negative energy).

Later on, Mina Simington revealed to the Signers that Yusei's father had entrusted the "Red Dragon Archfiend", "Stardust Dragon" and "Black Rose Dragon" cards to Goodwin, so that their correspondent Signer could seal the control units of the Ener-D reactor. She said that he obtained them from Roman, immediately after he was released from the project. When Roman showed the four dragon monsters to Professor Fudo, including "Ancient Fairy Dragon", Dr. Fudo took them and ran. However, he was attacked during his flight, so he dropped Ancient Fairy Dragon, similarly to how Uru had dragged the dragon down with it as the spider was sealed in the Nazca Lines. 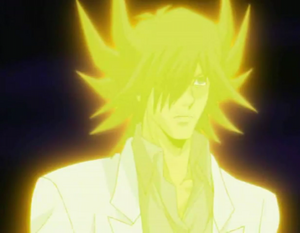 Dr. Fudo made a brief appearance in the Underworld during the events of Episode 58 after Yusei fell into the light of the Original Ener-D Reactor. He saved Yusei, and brought him to a river in the Underworld. (This is thought to be Sanzu River, a river that is thought to be the gate to the Underworld in Japanese mythology.) There, he asked Yusei for his forgiveness, as he had burdened his son with a heavy destiny. As he faded away, Dr. Fudo reminded Yusei that there were people that were waiting for his return. Yusei tried in vain to follow and talk to him some more. Unfortunately, his father disappeared, and Yusei returned to the Ener-D Reactor, unconscious, though he quickly awoke.

Later, in Episode 117, he made a brief appearance as Yusei and Bruno traveled through Dimensions by using Infinity. There, he talked about how Ener-D had destroyed the world, before sending them back to their time. Later at the end of that episode, Yusei came to a realization about his father.

In episode 128, Yusei stated that Dr. Fudo might still be alive, but trapped inside the Ener-D.

He appeared in Episode 138, when Yusei decided to risk his life in order to prevent the Divine Temple from destroying New Domino City.

In Episode 150, Yusei fell off his Yusei Go during his Duel with Z-one, and a beam of light from the Ener-D reactor stretched out to him as he fell. Inside a void of space, Dr. Fudo appeared before his son, encouraged him to continue fighting and physically struck him to get him back on his feet. Dr. Fudo told Yusei that as the Planetary Gear does, Yusei connected the hearts and the feelings of others, and that was his role now. As Yusei got up, Dr. Fudo vanished, and said this was the last time he could appear to Yusei. Yusei reappeared in the real world, and was still falling, when the Yusei Go drove down of its own accord to catch him. Yusei attributed this act to his father and thanked him before he continued the Duel.

During Jack and Yusei's Duel, Yusei mentioned his father and brought his friends and himself to tears.

Following his death during the Zero Reverse, Dr. Fudo's spirit remained in the Old Ener-D, and appeared several times to Yusei, who helped and inspired him to not give up. He had the ability to somehow manipulate time, as shown in Episode 117, when he sent Yusei back to his own time. In the same episode, he showed that he was also knowledgeable of what the Divine Temple was.