From Yugipedia
Jump to: navigation, search
For other versions of this character, see Halldor (disambiguation).

Halldor, known as Harald in the Japanese version, is a character appearing in Yu-Gi-Oh! 5D's. He is the leader and founder of Team Ragnarok competing in the WRGP. He is the owner of "Odin, Father of the Aesir" and the Ansuz Rune Eye. 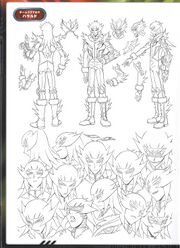 Halldor possesses two completely opposite sides to his personality. Outside of a duel, he is calm and composed. Inside a duel, he displays anything but a calm exterior, openly showing his emotions. He also tends to be very prideful and haughty during a duel, using "warawa", which is a phrase of referring to oneself that is usually used by those with status, with his case being Odin's chosen duelist. Outside a duel, he is more formal, using "watashi", a more formal way of referring to oneself. His drastic personality changes in and out of a duel happen almost instantly. Immediately after his duel with Yusei, he calmly congratulated him.

When Halldor was a boy, Sebastian told him of his destiny and that Odin's eyes will open once he is worthy to wield it. Taking this advice to heart, Halldor spent years travelling the world honing himself to become worthy of wielding Odin.

Halldor received his Rune Eye while acting as a military pilot. During a flight, he and another comrade were threatened by the mysterious appearance of clouds. While in the storm, unable to see anything, Halldor's Rune Eye appeared and with its power allowed him to see through the storm and prevent his comrade from crashing into mountains by using the rockets from his plane. Because of this, he was called in for wasting the material but quit to follow his interest in Norse Mythology.

Long after this event, Halldor began researching about the Norse mythology involving Ragnarok and went on a journey to hone his dueling skills and become worthy to own "Odin, Father of the Aesir" which was in a tree root in a chamber beneath his family's mansion. He did as instructed by Sebastian due to his family's duty.

Halldor then began searching for others who might also have a Rune Eye, with the help of his servant Sebastian. This led him to finding Dragan's father who gave him "Thor, Lord of the Aesir", with the condition of delivering that card to his son. After meeting Dragan, who had survived an avalanche because of the Rune Eye protecting him, Halldor convinced him to use "Thor".

Lastly, Halldor, along with Brodor, traveled to an island where the "Loki, Lord of the Aesir" card was. Upon finding it, Brodor steals it and tries to escape on a boat. As Dragan, Halldor and Sebastian follow after him, Brodor's boat crashed against a boulder and sent him flying towards a pillar of rock.

However, the final Rune Eye appeared on his eye and a mysterious thunderbolt destroyed the pillar. After the three of them catch up with Brodor, he says that the card is his, which Halldor acknowledges, saying that "Loki" has chosen him.

Halldor, along with his companions, were on a plane flying towards New Domino City for the WRGP finals. At the same time, the Three Pure Nobles achieved falsification of history. Halldor, along with the others noticed that the Aesir had protected them from the wave.[1]

Later, Halldor and his team appeared publicly to host an exhibition Duel against the other teams in the WRGP, where Dragan chose to Duel Jack Atlas. During the Duel, after Dragan Summons "Thor, Lord of the Aesir" and attacks "Red Dragon Archfiend", the two monsters emit a strange wave of energy while battling. Because the force began to destroy the building, the Duel was called off.[2]

Before their match against Team 5D's, his comrades witness how the Spiral building is emerging into their world. Yusei Fudo, Jack and Crow Hogan arrive, and Halldor realizes that the Mark of the Dragon allows them to see the building as well. He reveals that they know Team New World are the ones behind the upcoming crisis.

Halldor then proceeds to tell them the story behind the Rune Eye, as well as that of the 3 Aesir. After this, Yusei asks him to cooperate with them in stopping Iliaster. However, Halldor reveals that the three Aesir do not wish to ally themselves with the Crimson Dragon because Yusei's father had been the one who created the Ener-D reactor, and Roman Goodwin caused Zero Reverse and began all this. Because of this, they believe that Yusei himself also carries a destiny of destruction. Therefore, Halldor declares that the semifinals will decide who fights against Iliaster.[3]

When Halldor finally faces against Yusei in the semifinals, Halldor pushes him into a corner as he has all 3 Aesir on the field. Still Yusei, with the power of the Crimson Dragon and "Shooting Star Dragon", was able to defeat him and with this Team Ragnarok loses and Team 5D's proceeds to the finals.[4][5]

After the Duel ends and both duelists get back to the pits, Halldor recognizes Yusei's strategy of countering the "Odin's Eye" to win the Duel. He then uses his Rune Eye and notices that behind Yusei and "Shooting Star Dragon" is the Crimson Dragon. Halldor takes this as evidence that the Aesir now acknowledge Yusei and his friends as comrades. After Dragan, Brodor, and Sebastian arrive to where he is, Sebastian questions him if they should leave the fate of the world in their hands. Halldor then responds that Yusei's fate won't bring destruction but instead a road to a brighter future.[6]

When the Three Pure Nobles appear to the Signers the day before the WRGP finals, Halldor and his teammates are also present. They explain to Team 5D's that the fate of the world lies with them winning the match as that would cause the Divine Temple to disappear.[7]

Halldor and his team watch as Team 5D's battle and defeat Team New World and later congratulate them on their victory. They also witness the appearance of the Divine Temple.[8][9]

Halldor, Dragan, and Brodor appear again on their Duel Runners. Brodor states that theirs were working because they were using the power of their Rune Eyes. Halldor further explains that they weren't affected by the negative rotation, implying that the Duel Runners of Team 5D's should work because of the power of the Crimson Dragon.[10]

Later on, the team speaks with Yusei alone, stating that they will create a path to the Divine Temple. Halldor tells Yusei of the legend of Rainbow Bridge Bifrost, a path that connects the human world with the divine world. He explains that he and his teammates will use the energy of the Ener-D Reactor to create and manifest a path on the Daedalus Bridge. They travel with Yusei and Bruno to the reactor. Connecting their runners to it, the three Summon the Aesirs to increase Ener-D's volume and reverse its rotation. Halldor then calls forth Bifrost, creating a path from the Daedalus Bridge to the Divine Temple. As Yusei and his friends travel on the path, Team Ragnarok struggle to maintain the bridge. Eventually, their Valhallanders reach their limits and explode, causing the Aesirs and Bifrost to disappear.[11]

He and his teammates are later shown to have survived.[12] When Yusei falls out of his Duel Runner in his fight with Z-one, Halldor notices the Momentum energy heading towards Yusei.[13] He was last seen cheering on Yusei during his duel against Z-one.[14]

Halldor plays a "Nordic Ascendant" Deck, which is based on lesser gods and beings from Norse mythology, buffered with Trap support. His ace card is "Odin, Father of the Aesir", the strongest of the three "Aesir" Synchro Monsters.