Angela unsuccessfully tries to interview Yusei Fudo after the Fortune Cup (in the dub, Angela incorrectly calls him "Fusei Yudo" which causes Carly to try to correct her). When Goodwin made an announcement pertaining to the Duel and Carly asked about Yusei's mark, she becomes annoyed, thinking Carly was asking an off-topic question. After the announcement is over and the group talk about Jack, she quickly leaves.[1]

With Carly held for questioning by Sector Security after Yusei and Grady's Duel, Angela posts an incendiary article about the Fortune Cup title Duel, referring to Yusei as the "alleged King" and theorizing that he cheated during the Duel, despite not having a single comment from him.[2]

During the event made to promote the premiering of Atlas Rising she publicly questions Goodwin about the fact that Jack is from Satellite, just like Yusei, but Goodwin avoids the subject saying he cannot answer such uncertain information.[3]

Angela is seen reporting on the destruction of the city surrounding the Arcadia Movement building, after it was attacked by two "Earthbound Immortals".[4]

Angela tries to report at the scene of an angry crowd demanding answers from Sector Security. The mob takes over her spot in front of the camera crew in order to shout at Goodwin. Goodwin phones her and requests that she calm down the crowd. Angela points how exceedingly difficult that is, but Goodwin reminds her he has done favors for her in similar situations and is counting on her.[5]

Sometime later, while the Signers war against the Dark Signers is raging on, Angela is seen reporting once again. As she states through the news that a Martial Law has been initiated on the city, as a response to the unaccounted disappearance of City residents due to Misty's "Earthbound Immortal". Because of that law not a single citizen is seen on New Domino's main street.[6] 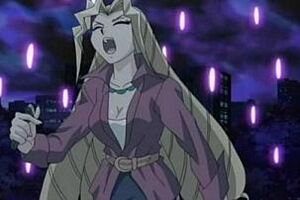 She later reports that it has been several days since the geoglyphs incident, and there are still no comments from Sector Security about the subject.

Angela is present during the Duel where Yusei, Jack and Crow Hogan face Rex Goodwin, covering the event intensely. She is the last of the reporters to be absorbed when Goodwin Summons "Earthbound Immortal Wiraqocha Rasca".[7] As with all people who get absorbed to Summon an "Earthbound Immortal", she was returned to normal upon Goodwin's downfall.

Angela informed the public about Jack being a suspect for the incidents caused by the imposter Jack Atlas.[8]

She informed the public of the havoc occurring in the city during the World Racing Grand Prix, that the highway had been destroyed by Duel Runners crashing on it and that Sector Security has halted the tournament due to these events.[9]

Following a falsification of history, she presented the news about the arrival of the famous Team New World at the airport.[10]