Stephanie is a waitress at Cafe la Geen. She loves Jack Atlas, but is too shy to express these feelings to him.

Stephane has a similar personality to that of Carly when it comes to Jack, occasionally stuttering and being shy around him sometimes.[1][2] She even went to the point of simply taking Jack's request despite another person having first made a request.[3] 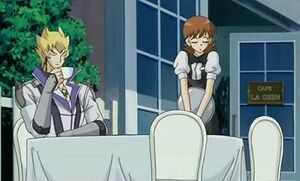 Stephanie being shy as she serves Jack a cup of Blue-Eyes Mountain.

One day she served him a cup of Blue-Eyes Mountain coffee. She tried to say something, but Jack spotted her acting awkwardly, so she excused herself and left, disappointed that she couldn't talk to him again. She heard a girl's voice coming from Jack's table, when Carly Carmine sat next to him. She gets jealous and spies on them, wondering who Carly is. When Crow Hogan arrived and started telling Jack off for spending so much money on coffee, Stephanie realized Jack was in trouble and wondered what she could do to help, but was interrupted by Marco, who has come to pick up corrugated cardboard.[1]

When Jack went through a day of getting fired from multiple jobs, she became excited when he started working at the cafe. However Jack decided to quit at the last minute and she watched disappointed as he left.[1]

Stephanie unsuccessfully tried talking to Jack on occasions after that, but was too shy. When she finally got the courage to get Jack's attention, Jack was annoyed over Crow borrowing the Phoenix Whirlwind and yelled, asking what she wanted. Stephanie apologized and left him alone.[2] 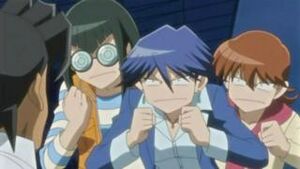 Carly, Mina and Stephanie ordering Trudge to let them pass.

She attended Jack's first Duel at the preliminaries of the World Racing Grand Prix, where she cheered for him. Once he got hurt due to his Duel Runner malfunctioning, she ran to see Jack, along with Mina Simington and Carly, who both asked her who she is. They were stopped first by Trudge, who is frightened by them and let them past. They were then stopped by another member of staff. Mina showed her Sector Security ID and Carly showed her press badge, allowing them passage. Desperate to find a way past, Stephanie searches her pockets and gave him a voucher of the cafe. The three of them fought off the staff, who were to attend to Jack and took the stretcher to take Jack to the sick bay.[4]

She, Carly and Mina cheered out loud for Jack when Team 5D's were about to face Team Catastrophe, causing Trudge to bury his face in his hand.[5]

After the WRGP was halted, Stephanie was glad that she got to spend more time with Jack, as he frequently returned to the coffee shop. She watched him drink and ignored other customers in favor of serving Jack.[3]

Stephanie was also seen cheering for Jack Atlas at the final of the WRGP when Team 5D's was Dueling against Team New World.[6] After Jack lost to Jakob, she along with Carly Carmine rush him to receive medical attention.[7] She along with Carly, Mina Simington, Tetsu Trudge, Crow Hogan, and Jack Atlas was seen cheering for win Yusei to Defeat Aporia.[8] After Yusei won his Duel, she along Carly and Mina rush to congratulate Jack and everyone else congratulated Yusei, Crow, and Jack. After celebrating everyone discover that the Ark Cradle is falling. Mina suggest that her along with Carly should evacuate the city. She runs to the Cafe la Geen owner and tells him that she is staying because it's Jack's favorite place.[9]

She later on, decides to evacuate the city. She was then seen cheering for Yusei Fudo to win his Duel against Z-one.[10]

After this, with the conclusion of Yusei and Jack's final Duel, she is clearly upset at Jack's decision to leave New Domino City but due to encouraging words from Mina, she wishes Jack luck while getting into an argument with both Carly and Mina.[11] 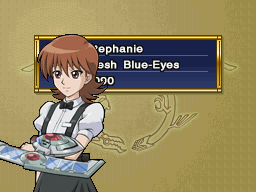 Stephanie, in Over the Nexus

Stephanie is an opponent and possible Tag Partner in Yu-Gi-Oh! 5D's World Championship 2011: Over the Nexus. She is located by the Fountain Plaza and teams up with Carly.

Stephanie also appears in Tag Force 5 and Tag Force 6, serving orders which can improve the mood of the player's current partner. She is among the few characters who can distinguish Jack from his impostor.