Demise appears as a Theme Duel opponent, challenging the player to win a Duel against him using the automatic victory condition of "Final Countdown". 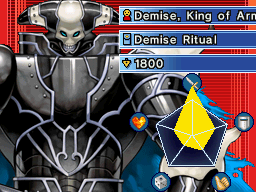 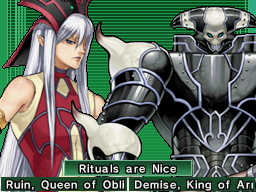 Demise is a Tag Duel opponent, partnered with Ruin, Queen of Oblivion as the Rituals are Nice Tag Team. They can be unlocked by winning a Duel using "Final Countdown". 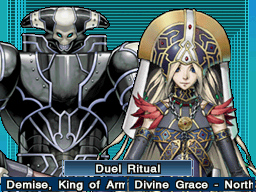 Demise and Divine Grace - Northwemko can be unlocked as Tag Duel opponents by completing 300 Single Duels. Their Tag Team name is "Duel Ritual". 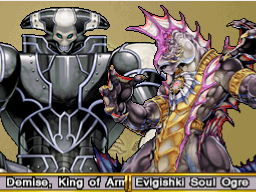 Demise appears as a Tag Duel opponent, partnered with Evigishki Soul Ogre as the "Dark Sea Ritual" Tag Team. They are unlocked when the player wins a duel by inflicting battle damage with "Skull Servant".