The designs of the Sacred Beasts, "Uria" was overseen by Kenichi Hara. Each of them resembles one of the three Egyptian God Cards; "Uria, Lord of Searing Flames" finds a counterpart in "Slifer the Sky Dragon". Unlike the God Cards, however, they possess certain visual cues that make them distinct from their predecessors, including translucent wings and more pronounced claws and skeletal features.

Similar to "Slifer", "Uria" has two mouths, but simply (as can be seen in the page picture) has a second set of teeth surrounding its mouth, and its larger two teeth are near the tip of its jaw, rather than the back. Uria's wings are attached to its arms, rather than being separate, and its shoulders are flanked by more spikes.

The Shadow Riders sought to acquire the Spirit Keys and revive the Sacred Beasts. In order to open the gate, a strong dueling presence is required; if the keys are stolen and placed in the gate, (as attempted by Don Zaloog) for example, nothing will occur. To meet the challenge of the Shadow Riders, seven of Duel Academy's finest duelists were selected, these duelists were Jaden Yuki, Zane Truesdale, Chazz Princeton, Alexis Rhodes, Bastion Misawa, Lyman Banner (the only Shadow Rider to get his key by default, due to the fact his true identity was unknown at the time) and Vellian Crowler, and although the Shadow Riders were defeated, Kagemaru managed to awaken the Sacred Beasts because of the dueling energy released from the duels.

Kaegmaru faced Jaden Yuki in a duel to allow him to gain the boy's power to commune with Duel Spirits. Uria was the first Sacred Beast summoned, and gave Jaden a large amount of trouble due to its ability to revive itself and power up at the same time. In exchange for freeing them from imprisonment, the Sacred Beasts slowly returned Kagemaru to a youthful state, empowering him with the energy sapped from Duel Monster spirits, but Jaden Yuki's interference resulted in the man's downfall. They were thus locked away once more.

When Jesse Anderson was possessed by Yubel he reappears after having been missing for episode 131 to 147, he uses them in a Deck based around quickly Summoning the Beasts and "Armityle". Uria was summoned second in the Duel, and quickly turned the match around for Yubel by destroying Adrian's "Burden of the Mighty".

Although Yubel didn't use them in her final Duel with Jaden, "Raviel" was shown to be in her Deck. What happened to them after Yubel merged with Jaden is currently unknown, although it is likely that Jaden returned them to their resting place.

Uria is a Theme Duel opponent that challenges the player to summon its own card. 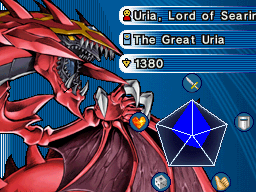 Uria is a Level 5 Theme Duel opponent that challenges the player to summon its own card.