From Yugipedia
Jump to: navigation, search
For other versions of this character, see Jim Crocodile Cook (disambiguation).

Jim Crocodile Cook is a student hailing from South Academy who enters Duel Academy in the third year. Well-versed in earth science and Dueling, Jim serves as an ally to Jaden Yuki and the others. 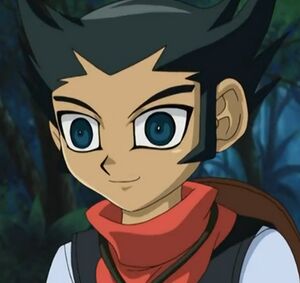 Jim is an expert geologist and paleontologist, having taken part in an excavation of a Tyrannosaurus in the past and has a crocodile named Shirley, initially believed to be a fake by Vellian Crowler and Jean-Louis Bonaparte, who he carries around in a specially made backpack wherever he goes. Jim regards Shirley as "family" and does not consider her to be a pet. He places great trust into Shirley and often uses her as a judge of good character, which started his friendship with Jaden Yuki. Jim wields a Duel Disk in the shape of a boomerang.

Jim injured his right eye after saving Shirley from an animal trap. After regaining consciousness, he is imbued with the Eye of Orichalcum by a man who was touched by Jim's devotion to Shirley. The man who gave it to Jim told him it was supposed to have incredible powers when in the presence of a special comet. Afterward, Jim kept his right eye bandaged. 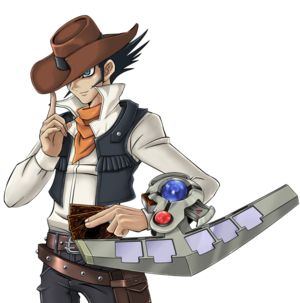 During the Duel between Jaden and Axel Brodie, Shirley began acting strangely due to electromagnetic waves coming from within the jungle. Meeting up with Jaden and his friends after Shirley inadvertently attacks Tyranno Hassleberry the next day, he and the group venture deep into the woods to investigate. Seeing another opportunity to claim Duel Energy, Thelonious Viper reactivates the signals, causing Hassleberry to act wildly and face Jim in a Survival Duel. Hassleberry quickly regains his senses and lashes out at Jim for disturbing his Dinosaur monsters, but is eventually defeated. 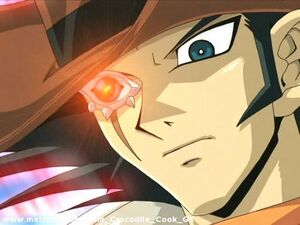 Jim using the Eye of Orichalcum

After Viper's defeat, Jim is one of the few students that aren't turned into Duel Ghouls when the academy is transported into a desert. Jim accompanies Jaden and co. to an alternate dimension and assists them in defending Duel Academy from the Duel Ghouls. After their journey into a third alternate world, Axel and Jim face Jaden, who has turned evil and begun calling himself "The Supreme King". Jim Duels him in a desperate attempt to bring back his friend from the dark side, using his Orichalcum Eye to see into his heart, where it is revealed that he was depressed over the Duelist's burden that he does not have but needs, according to previous Duelists he has fought, and over the fact that he feels he needs to be evil in order to fight evil. Despite his discovery and attempts to free Jaden, Jim loses and both he and Shirley disappear, leaving the Eye of Orichalcum to fall into Axel's hands.

Although Jim disappeared he used the Eye of Orichalcum to communicate with Axel, helping him to regain courage and to defeat The Supreme King's power over Jaden. He is later discovered to be alive and held prisoner with everyone else who was defeated in a Duel (or "sent to the stars"), in the Duel Spirit World in an alternate dimension by Yubel and subsequently returns to his academy in episode 157.

In the Japanese version, he speaks frequently in English and gives nicknames to his companions such as "Dino Boy" and "Tomorrow Girl" for Hassleberry and Alexis, respectively. He has a habit saying "What" in English when he is surprised.

In the English dub, Jim has a stereotypical Australian accent.

Jim's name is based on Captain James Cook, the English explorer who was the first European to discover the east coast of Australia and Hawaii, the first to record circumnavigation, and mapped out Newfoundland and New Zealand. Jim is also one of the few characters who retains their original name in the dub.

Jim's character is loosely based on the late Australian wildlife expert Steve Irwin, as evidenced from his attitude and sense of humour.

Jim plays a "Fossil" Deck. His strategy relies heavily on the use of "Fossil Fusion" to remove from play the monsters in both his own and his opponent's Graveyards to Summon creatures of varying strengths dependent on the Levels and Types of the Fusion Material Monsters used for the merger. The monsters created by "Fossil Fusion" follow "reverse evolution" through the Cenozoic, Mesozoic, and Paleozoic eras; the more ancient the monster, the more powerful it is.