Mr. Brodie, known in Japan as Mr. O'Brien, is the father of Axel Brodie and a mercenary. He appears in several of his son's flashbacks, and his appearance and Deck are later copied by Trueman in his attempt to dispose of Axel.

Mr. Brodie is a mercenary who also Duels on the side. He appears in several of his son's flashbacks during season three, during which he teaches his son battle tactics and Dueling skills, which he utilizes together.

When Trueman targets Axel, he copies both the appearance and Deck of Mr. Brodie. Trueman exploits the darkness created in Axel's heart by an incident that occurred when he was a child. Mr. Brodie, his wife and Axel had crashed their van in the middle of a jungle, and it had been set on fire. Axel has to make a choice - save his father, or save his mother, as he only had enough time to get one of them out in time, since both were unconscious. However, Mr. Brodie actually wakes up and gets both Axel and his mother to safety. Despite this being what really happened, this incident still creates darkness in Axel's heart, as he knew he would have chosen his father, which would have ultimately resulted in the death of his mother. After Trueman defeats Axel, he takes Axel's form and visits Axel's parents in their cottage, presumably dragging them into the World of Darkness as well.

Mr. Brodie and his wife were most likely revived after Jaden reaches out to everyone trapped in the World of Darkness and helps them to escape by believing in their cards. 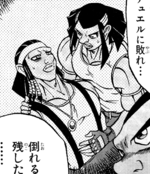 Mr. Brodie falling into a coma

Mr. Brodie is mentioned in the manga by Axel. Mr. Brodie was once involved in a Shadow Game, and fell into a coma because of it. Knowing that Chazz Princeton had Dueled David Rabb in such a game, Axel challenges Chazz, with Chazz agreeing to reveal everything he knows of the incident should Axel be victorious.

Though Mr. Brodie himself does not ever Duel on-screen, his Deck and appearance are copied by Trueman, who mixes in a few of his own cards to create this Deck. He plays a Volcanic Burn Deck similiar to that of his son, which utilizes a defensive strategy with "Firewall" and "Flame Wall" while inflicting effect damage with "Volcanic Wall".