Honest is a character version of the card, "Honest".

Honest appears as a Duel Spirit in the possession of Yusuke Fujiwara.

After Yusuke's parents died, the Duel Spirit Honest appeared to Yusuke and promised to protect him. As he watched over the young Yusuke, he would always refer to him as his "master."

During his time at Duel Academy, Yusuke had placed Honest's card inside a box before performing a black magic ritual in order to rid himself of all the painful memories he had suffered since the death of his parents.

After Yusuke's disappearance in the Abandoned Dorm, Honest took on the appearance of Yusuke and went to Duel Academy to search for Yusuke. Whenever someone asked who he is, Honest used his hypnosis to make them think they've always been friends. One day while collecting defective cards that didn't respond to Duel Disks, Honest noticed the cards were infected by Nightshroud and tried to destroy them, causing Trueman to chase him.

Jaden Yuki appeared and rescued Honest while still in disguise. After defeating Trueman, Jaden asked who he was. In an attempt to protect his identity, Honest attempted to hypnotize Jaden just like everyone else but Jaden's powers obtained from Yubel protected him from the hyponsis, forcing Honest to flee.

While researching information on Yusuke Fujiwara, Axel Brodie revealed there no student enrolled in Duel Academy under this name, but the name was listed under students who disappeared in the Abandoned Dorm.

He later reappeared in the Abandoned Dorm's Duel Arena after a duel between Jaden and Atticus, where Jaden identified him as Honest. Honest attacked them, believing them responsible for Yusuke's disappearance, but they manage to talk him down. They are then ambushed by Trueman, with Honest sacrificing himself to protect Jaden. After his sacrifice, Jaden received the "Honest" card to use in his third duel against Trueman.

Honest later appeared to the Nightshroud-possessed Yusuke and tried to convince Yusuke to remember the past, when he had friends, but Yusuke denied having any memories of Honest and such events.

While in disguise as Yusuke, Honest possessed a variety of supernatural powers like teleportation, starting fires with his mind, sensing darkness, and emitting shock waves that force opponents back. He also had the power to hypnotize people and alter memories, which he used to trick students that he is a student at Duel Academy. 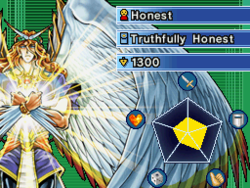