They can be unlocked as a Single Duel opponent by beating the Stone Monument challenge of Armityle the Chaos Phantom in the Chaos Duel World.

Their Tag Team with Marcel Bonaparte, titled D.D. Invitation, is unlocked once the player has 10,000 DP. 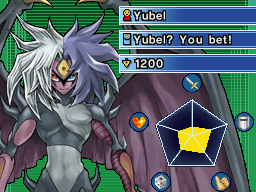 Yubel appears as a Single Duel opponent. The player can unlock them by Summoning "Yubel - The Ultimate Nightmare" during a Duel.