Zure is the general of the Dark World Army and right-hand man of its leader Brron. After hearing about the presence of Jaden Yuki and the others in the second alternate dimension, he waits for them to appear at his stronghold. Jaden reaches him first and he Duels Zure. Zure is ultimately defeated when Freed the Brave Wanderer comes to assist Jaden by placing himself in Jaden's Deck. Unfortunately for Jaden and company, he implants five orbs into Tyranno Hassleberry, Syrus Truesdale, Alexis Rhodes, Atticus Rhodes, and Chazz Princeton, marking them as sacrifices for Brron so he may use the "Super Polymerization" card.

Zure is later revived as a card in Brron's Deck. Brron Summons him in his Duel against Jaden, who would ultimately destroy Zure again.

Zure appears as a Tag Duel opponent in the Darkness Duel World, partnered with Kahkki, Guerilla of Dark World as the Dark Greeting Tag Team. They ambush the player while they are talking to Renge, Gatekeeper of Dark World, and once they are defeated, they do not appear again. 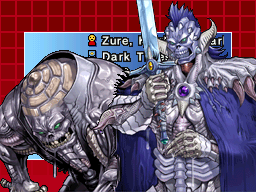 Zure plays a Power Deck, which revolves around the Field Spell Card "Power Zone" working in consort with the Burn effects of its "Power" monsters and support cards.