From Yugipedia
(Redirected from Anger Mask)
Jump to: navigation, search 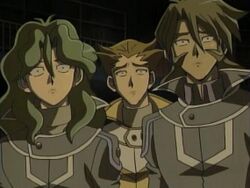 The three students encountered Marcel Bonaparte (who was possessed by Yubel) in the library, who offered them power if they joined his cause. (In the dub, they were promised food from the food storage facility if they Dueled.) Using "Polymerization", each of them was fused with a Duel Monster spirit, robbing them of their free will. The Three Masked Knights simultaneously Dueled Jesse Anderson, Axel Brodie, and Jim Crocodile Cook, serving as decoys while Marcel made his way to the Spirit Gates where the Sacred Beasts were sealed.

The students were returned to normal after being defeated. 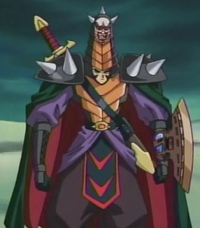 Anger Mask (怒り仮面, Ikari Kamen), voiced by Kōichi Yokota in Japanese and Eric Stuart in Englsih, is a Duel Monster Spirit that was fused with Teraoka, an Obelisk Blue student. It Dueled Jim Crocodile Cook. 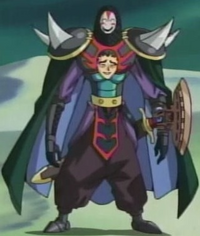 Laughter Mask's strategy relied on the synergy between "Fool Clown" and "Rough Exploder". 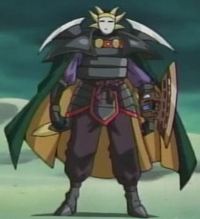 Emotionless Mask (無表情仮面, Muhyōjō Kamen), voiced by Yūki Fujiwara in Japanese and Marc Diraison in English, is a Duel Monster Spirit that is fused with Slate (Harada in Japanese), an Obelisk Blue student. It Dueled Jesse Anderson.

Emotionless Mask's strategy relied on the activation of several cards from his hand interacting with "Silent Pain" in his Graveyard, after he discards it by continually passing his turns.