Sky Scout, known as Birdman in the Japanese version, is a winged warrior who guards the power generator in the second alternate dimension that Jaden Yuki and his companions visit. He possesses the world view that high-Level monsters are superior to those of lower Level, and have the right to abuse them. After suffering a defeat to Jaden, he ultimately dies (in the dub, his energy is sent to the stars), but not after regretting his past actions and asking Jaden to save his world. He mentioned The Supreme King, implying that he already ruled that dimension.

Sky Scout is seen one more time prior to Jaden's Duel with Yubel, as Jaden remembers all the people Yubel has wronged. 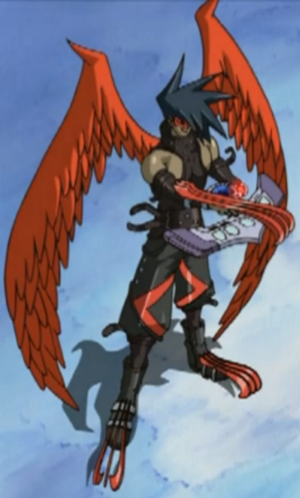 Sky Scout plays a Winged Beast Deck, which concentrates on "Simorgh, Bird of Divinity" and its effect damage capabilities, as well as preventing his opponents from Summoning high-Level monsters through "Level Tax". This reflects his world view of the superiority of high-Level monsters.