Ojama Green is a character version of the card, "Ojama Green".

Ojama Green serves as one of Chazz Princeton's spirit partners in the Yu-Gi-Oh! GX anime.

In the English dub, Ojama Green's voice and mannerisms are similar to Curly of the The Three Stooges; his brothers Yellow and Black talk like Larry and Moe, respectively. In the Japanese version, they talk like Japanese wannabe gangsters, call Manjoume "aniki" and use the honorific "dono" (殿) for Judai and Sho.

Before Chazz's Duel with Slade Princeton, Ojama Yellow told Chazz of his long lost brothers. Later that day, Chazz entered a well, where students had dumped weak cards, as he required monsters with less than 500 ATK for the Duel. Inside the well, Chazz found Ojama Green and Black, reuniting the brothers. The brother proved their strength in the Duel, as Chazz used "Ojama Delta Hurricane!!".[1]

At the start of the year Chazz was now fully respectful of his "Ojama" cards, claiming his opponent Reginald Van Howell III to be just like he once was; a cocky snob who only believed in power whilst Dueling. He proves that power is nothing in comparison to strategy by destroying Reginald's "Gilford the Legend" with "Ojama Delta Hurricane!!" and using his Ojamas to prevail. However Chazz was eventually brainwashed into the Society of Light, believing the Ojama's to be weak, he tossed away their cards off a cliff. Jaden was saddened to see Chazz had ditched his Ojamas and took it on himself to find them. Jaden managed to save the trio from a crab. After talking with them, he added them to his Deck to face Chazz in the hopes of returning Chazz to normal. Jaden managed to restore Chazz's old-self in the Duel, but Chazz accused Jaden of stealing his cards. Chazz managed to move the Ojamas to his side of the field, but lost the Duel in the process. The Ojamas then sided with Chazz and also accused Jaden of stealing them.[2][3]

During the quest for "Rainbow Dragon" Chazz is eventually turned into a Duel Ghoul along with his three Ojamas. When Chazz gets sent to the different dimensions away from Duel Academy, Yellow sticks by him up until Chazz dies, with Black and Green going with him ("sent to the stars" in the dub, though death is still heavily implied).

In his last year of Duel Academy, Chazz trains to become a Pro Duelist under the tutelage of Aster Phoenix. They eventually end up in a heated duel, and Chazz defeats Aster using Ojama Yellow.

Ojama Green is also a downloadable Ghost Duelist for June 2008. 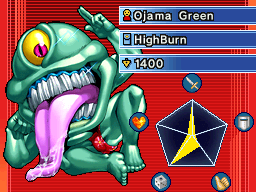