Hermann is a member of Team Catastrophe. He has two criminal marks.

Hermann's design is to fit his along with his teammates as being "villains" as he wears quite dark attire usually associated with bikers or "punks". His turbo outfit consists of a leather overcoat and a spiked, purple helmet.

Hermann along with Hans and Nicolas were originally from the dark slums of Satellite. They expected their lives to change when it merged with New Domino City, but not much happened and they gave up hope. Primo then appeared before them with a "beacon of hope" in the form of dark cards which he said will take them all to the top and make them Kings.

Hermann was originally seen when he used the effect of "Hook the Hidden Knight" to cause Crow Hogan's Duel Runner to crash (his identity was a mystery for several episodes), thus breaking Crow's right arm; due to this Crow couldn't enter in the World Racing Grand Prix and had to be substituted by Akiza Izinski. He was later seen a long with his teammates Hans and Nicolas smirking at the defeated Team Unicorn, even though they were in danger due to fatal crashes within the Duel Stadium. He was then later seen when Team 5D's were Dueling his team within the WRGP. He tried to cause Crow to crash again, but due to Crow's knowledge of the dark card he was able to avoid its attacks while also defeating Hermann during the duel. When he returned to the bay to switch teammates, he was greeted by an angry Nicolas who snatched the flag.

Team Catastrophe is disqualified from the WRGP when Nicolas' own Duel Runner crashed and is destroyed. 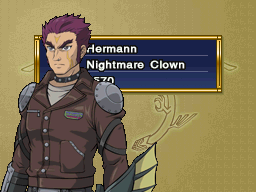 Hermann, in Over the Nexus

Hermann appears in Over the Nexus as part of Team Catastrophe. He is Team Catastrophe's first wheeeler and makes Toru crash, but Toru manages to drag his Duel Runner back to the pit and pass the baton to the player, who continues the match in Toru's stead. After defeating Hermann, the player duels against Nicolas.

After finishing the main storyline, the player can find the members of Team Catastrophe in the Mountain Pass, and Hermann can be faced in Single Turbo Duels or Tag Turbo Duels partnering with Nicolas.