Maria Bartlet, known simply as Maria in the Japanese version, is a primary level teacher at the Duel Academy in New Domino City, who teaches classes for child students. Among her students are Leo, Luna, Dexter, Bob, Patty and Sly.

Miss Bartlet was against Heitmann when he wanted to expel her students regardless of his threat about telling the Chancellor that they weed out the faculty (because he thinks the students are terrible because of her). She became worried about Yusei Dueling Heitmann, knowing how strong his Deck is, but Akiza assured her that Yusei could win against him. 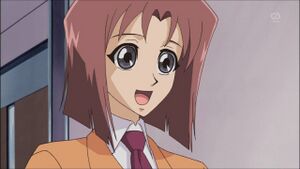 Lester disguises as Maria with her eyes are drawn differently

She introduces Lester as a new transfer student. Lester disguises himself as Miss Bartlet, to trick Leo into waiting for her after school. When the real Miss Bartlet saw Leo waiting in the classroom she asked him what he was still doing at school and stated he should really should go home. Upon finding this out, Leo realizes that he had been tricked.

She appears to be almost humble by personality, but she appears to have a slight strictness in her personality as evident by the fact that she scolded Leo when he complained about trying to summon his "Power Tool Dragon" during a Dueling lesson (they were using Warrior Decks for the lesson).