From Yugipedia
Jump to: navigation, search
"Tanner" redirects here. For the character in Yu-Gi-Oh! ARC-V, see Tarren.
For other versions of this character, see Bolt Tanner (disambiguation).

Bolt Tanner, known as Jin Himuro in the Japanese version, is a former Professional Duelist and inmate at The Facility, who eventually befriends Yusei Fudo.

Originally, Tanner was shown to be rude and aggressive to others outside of his own group, however after his defeat by Yusei, he becomes friendlier and nicer to others.

In the dub, Tanner speaks with a Brooklyn accent. 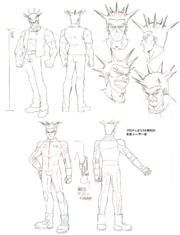 Tanner was once very prominent in the Dueling world, working his way up to facing Jack Atlas himself in a Turbo Duel. However, Jack easily defeated him, and from then on Tanner was little more than a joke in the Dueling world. Distraught, he fell in with criminals, drunks, and underground Duelists, and was quickly arrested (in the dub, his alcoholism and drug problems are only implied as Tanner states "It was all downhill from there", indicating it was after his loss to Jack). At the Facility, he is highly respected. He has all the new inmates Duel him in order to see if they are also worthy of respect.

He meets Yusei Fudo after Yusei is transported to the Facility. Tanner challenges Yusei, who is unable to Duel, since he doesn't have a Deck. Yanagi Duels in place of Yusei. Tanner brings out "Giant Ushi Oni" on his second turn and uses it to turn Yanagi's strategy against him, defeating him that same turn.[1]

Tanner speaks ill of Yanagi's cards, saying they're worthless and stomps on them causing Yusei to challenge him to a Duel, where Yusei uses Yanagi's Deck. Yusei defeats him with some difficulty and afterwards Tanner becomes friends with Yusei as well as apologizing to Yanagi for stepping on his "Crystal Skull" card.[2]

Yusei intends to escape the Facility with Tanner and Yanagi. Tanner gets beaten up and harassed by Mr. Armstrong for being friends with Yusei. (In both versions, there's a more elaborate reason why. In the original, Armstrong searches Tanner's cell for an alleged 'hidden weapon', using a palmed switchblade to 'find' it in Tanner's vest, while in the dub, Armstrong beat him up because he had smuggled magazines in his cell though Yusei insists Tanner had none, suggesting Armstrong was greatly unfair).[3]

After Yusei won the Duel with Armstrong, Tanner gave Yusei his "Giant Ushi Oni" as a lead to Blister, a friend of Tanner who could help Yusei.[4]

He and Yanagi are released from prison due to their companionship with Yusei. They go to meet with Yusei and Blister. Tanner tried to challenge Yusei to a Duel with his Deck against Yusei's. When Jack showed up to hand back "Stardust Dragon", Tanner greeted Jack, but was annoyed at being ignored.[5] Tanner becomes suspicious of Yusei being invited to the Fortune Cup, positive the tournament is an elaborate trap and for Yusei to watch himself because of it.[6] Throughout the tournament he supports Yusei, watching from the sidelines.[7][8]

After Yusei wins the Fortune Cup, Tanner and Leo help Yusei escape the reporters. After safely reaching Blister's hideout, Yusei tells Tanner and the others about the mysterious spider mark vision shown by the Crimson Dragon.[9] When Trudge arrives to get Yusei, Tanner objects but Yusei thinks it's perfect timing.[10] He then moves into Leo and Luna's apartment. He arranged for a meeting with Sayer in hopes of gaining the support of Akiza Izinski but is tricked by Sayer and they are knocked out by gas.[11] Yanagi and Tanner are taken to a secure room and locked inside.[12]

Yanagi and Tanner wake up in the room wondering what happened. They figure out that Sayer put them there and he could not be trusted. They try busting the door for a bit but get nowhere. The entire building shakes and the building starts collapsing. The door is finally loose enough to ram and they bust the door.[13] They find Luna watching her brother through glass. Tanner breaks the glass and frees Leo. They try to find a way out but Luna is lead to Akiza Dueling. They follow and watch Akiza and Misty Duel. He, Yanagi and Leo are protected from being sacrificed to Misty's "Earthbound Immortal" by Luna's Signer powers. The Duel stops when the building collapses and Tanner, Yanagi, Leo, and Luna run out of the building. They meet Jack outside and tell him that Akiza is inside and may need help. They run and the building collapses.[14] They find out that Akiza is in the hospital and they visit her.[15] Tanner and Yanagi, are last seen seeing the Signers off to Satellite.[16] 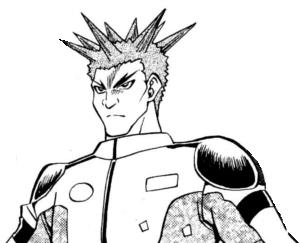 A silhouette of Bolt Tanner is seen when Lazar explains the type of people who will be competing in the D1 Grand Prix to Yusei.[18]

At the beginning of the D1 Grand Prix, Tanner is seen among the contestants.[19]

Later, Tanner is chosen to Duel Crow Hogan, losing swiftly through a FTK. In the manga, it is mentioned that he is a pro Duelist.[20]

Tanner's Turbo Deck is only shown in flashbacks, with the only shown card aside from "Speed World" being "Giant Ushi Oni".