This chapter was first printed on September 21, 2010 in the 11/2010 issue of the V Jump magazine. It was later reprinted in the American Shonen Jump magazine, and in volume 2 of the tankōbon.

As Akiza and Sherry put their differences aside and make-up after their Duel, the first round of the D1 Grand Prix continues on the second day. Many powerful opponents advance to the next round of the tournament, with the last match being between Synchro user Crow Hogan and Pro Duelist Bolt Tanner.

Mei states that that's their Queen, and Sakura agrees that "Lady Akiza" is too splendid for words. Yusei congratulates her from the sidelines, and Sect comments that that was an awesome Turbo Duel. Having just defeated Sherry, Akiza walks over to her. Sherry protests that Akiza ran away from the Academy. How could she have lost to Akiza? Akiza admits that she ran away, and acknowledges that Duel Academy Sanctuary may foster elite Duelists, but even there, she could have enjoyed Dueling. She knows because Dueling Sherry proved it to her. Akiza holds out her hand, and Sherry seems bemused by the fact that a Turbo Duel can be fun. She decides that if the feeling can make elites stronger, then it may be worthy of consideration. She asks Akiza where she learned the trick of riding her Duel Runner with her eyes shut. Akiza loses her composure upon remembering the ordeal, and sinks to the ground, admitting that she had been desperate to beat Sherry's Hand Scan. She can't believe it herself, and she'd never do that again. Sherry is surprised, and comments that Akiza hasn't changed; she's still as obstinate as ever. Akiza winks, claiming Sherry is just as stubborn, and the two girls laugh. Sherry tells Akiza that she had better win this, and Akiza replies that that's the plan. 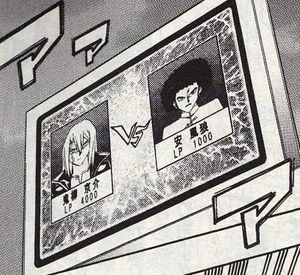 Kalin faces off against Afro

The M.C. announces the second day of the tournament, stating that the first round is coming to a head. Sect stands with Yusei (not having ditched their cloaks), while Akiza watches with Andre, and Jack watches from his box. Duel Security Rep Tetsu Trudge wins his Duel, saluting and commenting that no-one rigs Duels on his watch. Hunter Pace is displeased to see a cop. The "Handless Demon", Kalin Kessler, defeats Afro with "Infernity General's" direct attack, reducing Afro from 1000 Life Points to zero, while his remain untouched. Kalin comments that Afro can't satisfy him, and looks up at Jack in the box as he murmurs that only one person can satisfy him. Sect muses that every Turbo Duelist here is incredible, and Yusei agrees.

The duo are greeted (or rather, Yusei is greeted) by the orange-haired, Marked man, who comments that he saw Yusei's first Duel, and claims that it psyched him up. He elbows Sect out of the way, commenting that Synchro Monsters are where it's at, he thinks that him and Yusei are going to get along. Sect angrily tells the Duelist to keep his grubby paws off Yusei, calling him "M-head" in reference to his Marks. The Duelist isn't happy, and angrily changes the subject, pointing out that Sect isn't even Dueling, telling him to get to the stands. Sect promptly refuses, stating that he isn't taking orders from "M-head". The M.C. announces the final Turbo Duel of the first round, and Yusei watches two wrestle, before asking who the Duelist is. The Duelist remembers that he hadn't introduced himself, dropping Sect, but the M.C. beats him to the punch, introducing him as Crow Hogan as he is announced to be facing Bolt Tanner. Crow is ecstatic that it's finally his turn. He grins, telling Yusei to keep his eyes glued to his Turbo Duel; it's going to psych Yusei up. Sect just tells Crow to get out there and lose, calling him "M-head" again.

The Turbo Duel starts, and Tanner takes the first turn. Crow admits that Tanner's a Pro alright, as it isn't easy to get the jump on him like that. He congratulates him, and Tanner begins his turn, thinking that he's staked his honour as a Pro on the D1 Grand Prix - he can't lose. He sends four "Machina" monsters from his hand to the Graveyard, Summoning his ace monster, "Machina Cannon", explaining that "Machina Cannon's" ATK is equal to the number of cards he sent to the Graveyard times 800, a total of 3200 ATK. As the M.C. commentates, Sect congratulates "Porcupine-head", telling "M-head" to lose. Akiza observes that this is a Pro, and Crow comments that he's kidding, right? It's only the first turn. Tanner Sets a card, and ends his turn, thinking that Crow can't touch him with "Mirror Force" Set.

Crow begins his turn, drawing a card. He looks at it, and then at his hand, thinking that if he's got this hand, he can... He Normal Summons the Tuner monster, "Blackwing - Pinaka the Waxing Moon", explaining that when it's destroyed, he can add "Blackwings" from his Graveyard to his hand. Yusei is shocked to see a Tuner monster, and Jack grins, realizing that Crow's a Synchro-user too. Crow then Special Summons "Blackwing - Kris the Crack of Dawn", and "Blackwing - Gladius the Midnight Sun", which he explains can be Special Summoned when there's a "Blackwing" on the field. Tanner doesn't care how many low-level monsters Crow Summons, but Akiza sees that Crow's aiming for a Level 6 or Level 7 Synchro Summon. Crow isn't done yet; since Tanner has a monster with at least 2000 ATK on his field, Crow can Special Summon the Tuner monster, "Blackwing - Sharnga the Waning Moon." Sect is horrified to see Crow Summon four monsters in a single turn, and Yusei realizes what Crow's doing. Crow tunes the Level 2 Tuner, "Sharnga the Waning Moon" with the Level 3 "Gladius the Midnight Sun", as well as tuning the Level 3 Tuner monster, "Pinaka the Waxing Moon" with the Level 4 "Kris the Crack of Dawn". Yusei is shocked that Crow is Synchro Summoning two Synchro Monsters at once, as is Jack, who rises from his couch as Goodwin and Mina observe. Crow declares "Double Synchro Summon" as he Synchro Summons "Blackwing Tamer - Obsidian Hawk Joe", and "Blackwing - Gram the Shining Star". Then he activates a Trap card from his hand, "Black-Winged Arrow", which he can activate when he has at least four "Blackwings" in his Graveyard, allowing him to negate the effect of "Machina Cannon". A black quill punctures "Machina Cannon", and with its effect negated, its ATK returns to zero. Crow orders both of his monsters to attack, and Tanner frantically activates his "Mirror Force", but Crow activates the Spell card, "Black Cyclone" from his hand, which becomes a Quick-Play Spell Card when he's got a "Blackwing Tamer" on the field. It negates "Mirror Force", and Tanner can only think of his professional honor before Crows monsters attack him and "Machina Cannon", wiping out his Life Points. The M.C. announces Crow the winner, and comments in shock that Crow pulled off the first One Turn Kill of the tournament. He tells the crowd that that was the Duelist nicknamed the "Black Whirlwind", Crow Hogan. Jack gets up and leaves the box, reflecting that apparently, the D1 Grand Prix won't bore him at all.

Sect is shocked at how good Crow is, and Crow calls out to Yusei from the track, holding up his "super-fast Synchro Deck". He states that he's looking forward to their Turbo Duel, and Yusei thinks that Crow has surpassed his own high-speed Synchro. He thinks that Crow is a Duelist who uses a super-fast Synchro Deck, with an emphasis on Special Summons. He comments that this should be good, and tells Crow to bring it on. The M.C. announces the end of the first round.

Turn 1: Tanner
Tanner discards "Machina Soldier", "Machina Defender", "Machina Sniper" and another unspecified "Machina" monster to Special Summon "Machina Cannon" (0/2200) from his hand in Attack Position, via its own effect; its ATK increases by 800 for each monster discarded (0/2200 → 3200/2200). Tanner Sets "Mirror Force".

As Crow now has 4 "Blackwings" in his Graveyard, he activates his Trap Card "Black-Winged Arrow" from his hand, negating the effect of Tanner's "Machina Cannon" ("Machina Cannon" 3200/2200 → 0/2200). Crow attacks with "Obsidian Hawk Joe" and "Gram the Shining Star", but as Crow declared an attack, Tanner activates his Set Trap Card "Mirror Force", destroying all Attack Position monsters Crow controls. As his opponent activated a Spell or Trap Card, Crow activates his Spell Card "Black Cyclone", which he can activate as a Quick-Play Spell Card since he controls a "Blackwing Tamer" monster, negating the activation of "Mirror Force" and destroying it. The attacks continue, and "Machina Cannon" is destroyed and Tanner takes a total of 4800 damage (Tanner 4000 → 0).