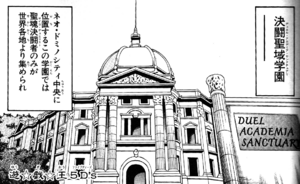 The Academy, in the manga, is located in the center of New Domino City. It is said that Psychic Duelists from around the world gather here, so that they can improve their abilities. The school's main purpose is producing elite students to serve the Dueling world. Akiza Izinski and Sherry LeBlanc are the two Duelists with the highest caliber to hail from this Academy.

Sherry has earned the title "Empress of Duel Academy Sanctuary".[1]

Akiza left this academy and currently attends Queen's Duel Academy. Sherry is angry over this and vowed to never forgive Akiza for running away when they faced each other in the D1 Grand Prix.[1]