Sherry LeBlanc (シェリー・ルブラン, Sherī Ruburan) is a character from the Yu-Gi-Oh! 5D's manga. She is a Psychic Duelist with an ability referred to as "Hand Scan", in which she can view her opponent's current hand.[1]

Sherry has long, waist length, blond hair with bangs that curl away from her face in a horizontal direction and has emerald color eyes. She wears a Turbo Dueling outfit which is white with red accents that run along the outside of her arms, down the outside of her legs, and wrap around her calves. She also wears a red undershirt. Her uniform also consists of grey shoulder, knee, elbow, and shin guards, while she wears charcoal colored padding over her chest. Her helmet is also red with gold accents near the crown that run from front to back, while the open-mouthed mouth protector is grey, with an orange visor. While Sherry attended Duel Academy Sanctuary, she wore a formal student's outfit and had tied up hair. She also used a Academia Disk while attending the institution.[2]

Sherry is shown to be a serious person who believes Duels can't be fun. She is also shown to be ruthless on her conquest to defeat Akiza Izinski for leaving Duel Academy Sanctuary.

Sherry attended the Duel Academy Sanctuary, an academy located in central New Domino City which attracted many Psychic Duelists. Here, Sherry met Akiza Izinski, another psychic Duelist and the two of them were deemed the best among all other students there. Akiza chose to leave the academy due to it's elitist ways[2], which made Sherry feel betrayed and harbor a hatred for Akiza.[1] 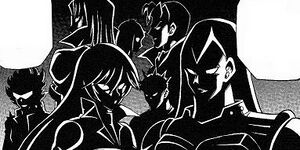 The silhouette of Sherry and other contestants.

Sherry's silhouette is shown as one of the Duelists entering the D1 Grand Prix when Lazar explains the tournament to Yusei Fudo after he is defeated by Jack Atlas.[3] She attends the opening ceremonies for the tournament and angrily looks on as Jack insults her and the other contestants.[4]

During the first round of the tournament, Lazar sees to it that Sherry and Akiza Duel first so he and Rex Goodwin can view their psychic abilities. Sherry manages to take an early lead by using her "Hand Scan" ability on Akiza, forcing her to discard her entire hand. She then tells Akiza that she can never forgive her for running away from the Duel Academy Sanctuary.[1] Sherry attempts to get Akiza to see the error of her ways by telling her that elite Duelists like her belong at the Duel Academy Sanctuary and despite Akiza telling Sherry the reasons for why she left, she continues to view Akiza as in the wrong. As the Duel continues, Sherry's "Hand Scan" ability takes it's toll on Akiza, forcing her into a Lockdown. Sherry continues at full force, managing to Summon her ace, "Klaret the Elite Magic Elf" which when used in combination with her Lockdown strategy, has 4000 ATK. Akiza begins to give up hope, but after being cheered on by her friends, decides to draw with her eyes closed, allowing her to avoid Sherry's Lockdown combination. She then manages to Summon her "Fallen Angel of Roses" and defeat Sherry.[2] After the Duel, Sherry and Akiza become friends again after Sherry questions Akiza on where she learned to drive a Duel Runner with her eyes closed (which causes Akiza to fall to the ground out of shock as she realized what she had done).[5]

Sherry uses a "Magic Elf" Deck which is based around guessing cards in the opponent's hand. She uses a Lockdown of "Mokusatsu" and "Name Erasure" which won't fail due to her "Hand Scan" ability.