From Yugipedia
Jump to: navigation, search
For the hospital with a similar name in Domino City, see Domino City Hospital. 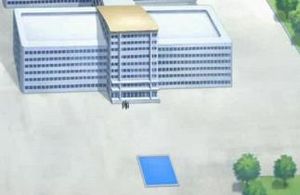 Domino General Hospital is a hospital in New Domino City in Yu-Gi-Oh! 5D's. 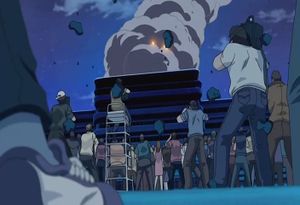 The damage from the Shadow Duel.

Jack Atlas was sent their shortly after losing his title as King and needed treatment for injuries sustained in the title Duel. The paparazzi were denied entry, but Carly Carmine managed to disguise as a nurse and sneak in. Trudge, possessed by the Dark Signers, also managed to get in and challenge Jack Atlas to a Shadow Duel. Jack, unfit to duel with his injuries, got Carly to help him, by making the moves he tells her. The Shadow Duel caused explosions, damaging the building. The explosions were caught on camera, by the reporters, but cause was made unknown, since Mina Simington took the security tape to protect Trudge.

Akiza Izinski was treated here, when she was left unconscious after the Dark Signers attack on the Arcadia Movement building. The media didn't know who the girl admitted was and asked the Senator Hideo why he was visiting. Hideo later brought Yusei over to help wake Akiza up. After she did, Akiza wound-up engaging in a Duel against Yusei.

Akiza visited Haluna here shortly before Haluna's discharge date to congratulate her on her recovery.[1]