"The Duel Emperor Finals!!", titled "The Emperor Playoff!!" (！！ Enperā Ketteisen!!) in the Japanese version, is the first part of a 78-page special chapter of the Yu-Gi-Oh! 5D's manga. It was first published on May 21, 2015 in the 07/2015 issue of the V Jump magazine as a preview. It was printed alongside the second part in the final volume of the series, released on June 4, 2015. This chapter serves as an epilogue to the manga's events.

Yusei reaches the top in the second D1GP and finally earns the right to face Jack Atlas in a Duel to restore his pride. Now, Yusei and Jack will clash in a Turbo Duel to decide who will earn the title of "Emperor of Turbo Duels".

In New Domino City, the MC announces that it's been a year since the first D1 Grand Prix was cancelled after an unexpected accident, but now they're coming up on the end of the second D1 Grand Prix. The throne of the King of Turbo Duels is empty, and they're just about to fill it. The D1 Grand Prix champion, Yusei Fudo, and the King, Jack Atlas, sit astride their Duel Runners, wearing Turbo Suits. The quarter-finals board shows the semi-finalist rankings; Yusei and Akiza Izinski Dueled in the finals after defeating Kalin Kessler and Crow Hogan respectively. The MC wonders which of these Duelists will dominate the Emperor Finals and win the Emperor's crown.

Crow is grousing over the fact that he isn't up there, while Yoshi Hogan reassures him that it'll be him next time. Leo sweatdrops, wondering if Yusei will be okay. Luna, now lacking her "Kuribon" doll, wonders why Leo is getting nervous. Greiger, Bolt Tanner, Hunter Pace, and Tetsu all stand on the sidelines, while Kalin stands alone, whispering Jack's name. Akiza stands with Sherry LeBlanc and Sect Ijuin as she whisper's Yusei's name, and Sect tells Yusei to go for it. Mina Simington watches alone from the upper levels, noting that Master Atlas is wearing a Turbo Suit, and she notes his unusual determination, wondering if Yusei Fudo is really that formidable an opponent.

Jack smiles, commenting that he thought that Yusei would make it here. Yusei agrees that he came to get revenge for last year. Jack muses that he doesn't hate the cheers of the crowd, and allows Yusei the right to enjoy this one moment on equal terms with him. Turbo Duelists don't need words. Yusei agrees that they let their speed do the talking, and let their Sense carry their feelings. The lights begin counting down, and Yusei and Jack rev their Runners' engines, before setting of with a cry of "DUEL!" at the green. Yusei takes the lead as the MC announces that the Emperor Finals are underway, and he wonders who will get the first attack. Jack snorts, commenting that he's got his skills and his fully tuned Phoenix Whirlwind; Yusei shouldn't think that he can ride it in front of the King. He accelerates past Yusei, much to Yusei's frustration, as the MC announces that the first attack goes to the King, Jack Atlas.

Jack declares his turn and draws, then he Sets three cards and Summons the Tuner monster "Dust Lord Ash Gash" in Defense Position, before ending his turn. The uncharacteristic show of defense shocks Greiger and Bot, and Akiza notes that Jack is being cautious around Yusei, while Kalin whispers Jack's name.

Yusei declares his turn and he draws, adding the card to his hand, which contains "Junk Changer", "Scrap-Iron Welding", "Synchro Creed", "Junk Armor", "Junk Defender" and "Necroid Synchro". He realizes what he can do with his hand. Mina watches as the MC wonders what strategy Yusei will show them as the King shores up his defense, while on the sidelines, Sect tells Yusei to go for it. 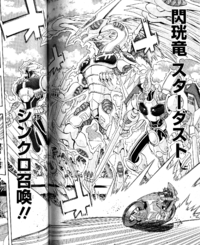 Yusei activates the Spell Card, "Scrap-Iron Welding", Special Summoning two "Junk" monsters from his hand. He Special Summons "Junk Armor" and "Junk Defender", and then he Normal Summons the Tuner monster "Junk Changer". Yoshi praises Yusei's building, and he comments that he's just like Crow. Leo notes that the monsters have a total of 8 Levels, so "Stardust Spark Dragon" will be on its way. But instead, Yusei tunes the Level 3 "Junk Defender" and "Junk Changer", and Luna is surprised that Yusei is Synchro Summoning a Level 6 monster rather than "Stardust". Yusei chants, "Sacred spear that scorches the starry sky! Unleash your soul and awaken the world! Stardust Assault Warrior Synchro Summoned!" Yusei activates the effect of "Stardust Assault Warrior", Special Summoning a Tuner monster from his Graveyard. He revives "Junk Changer", and activates its effect since he controls another "Junk" monster, increasing or decreasing its Level by one, and he increases it to 4. Then he tunes the Level 2 "Junk Armor" and the now-Level 4 "Junk Changer", and Crow notes that it's a serial Synchro. Yusei chants, "Sacred wings that command the meteor shower! Ride the wind of souls around the world! Stardust Charge Warrior Synchro Summoned!" The effect of "Stardust Charge Warrior" allows Yusei to draw a card when it's Synchro Summoned, but Yusei isn't done yet; he activates the Spell Card "Necroid Synchro". This allows him to exclude monsters from his Graveyard as Synchro Material, and Yusei tunes the Level 2 "Junk Armor" and the Level 3 "Junk Defender" with the Level 3 "Junk Changer". He chants, "Flash of light that splits the sea of stars! Shake our souls and roar through the world! Stardust Spark Dragon Synchro Summoned!"

Akiza cheers that it's Yusei's partner, and the twins call "Stardust's" name. Jack comments that "Stardust Spark Dragon" finally showed up; Jack has been waiting. Yusei activates another Spell Card, "Synchro Creed, drawing two cards since there are three Synchro Monsters on the field, and he draw "Junkuriboh" and "Accel Synchro". Hunter and Tetsu watch as the MC recaps Yusei's triple Synchro, and Crow notes that Yusei still has three cards in his hand. He comments that Yusei's high-speed Synchros have actually got better. Yusei declares his Battle Phase, attacking "Gash" with "Stardust Assault Warrior's" "Shooting Driver" attack, and he explains that "Stardust Assault Warrior" inflicts piercing damage. Jack activates a Trap Card, "King's Camp", negating the attack and Special Summoning three Level 4 or lower "King" monsters from his Deck; Cursed Fire King Doom Burst", "Wandering King Wild Wind", and "Red Lotus King, Flame Crime", all in Attack Position. Yusei instead attacks with "Stardust Charge Warrior", which can attack all Special Summoned monsters. "Stardust Charge Warrior" levels its wings of cannons, and attacks with "Shooting Crusher", destroying "Wild Wind", "Doom Burst", and "Flame Crime". Akiza cheers that Yusei wiped out all of the "Kings" that Jack Summoned, and Sect cheers Yusei on. The attack reduces Jack to 3000 LP, but he cancels out the Sense with his Sense Banish and he asks if that's all that Yusei's got. Yusei replies that it isn't, and he attacks "Gash" with "Stardust Spark Dragon", destroying it with "Shooting Blast". This time Jack is unable to cancel out the Sense, much to Kalin and Mina's shock and Sect's jubilation.

Yusei holds up "Accel Synchro", and he declares that he'll get his Sense through to Jack with this card. He accelerates past Jack, as his Duel Runner generates wings of light, much to the MC's shock, and he activates the Quick-Play Spell Card, "Accel Synchro", halving the Levels of a Tuner Synchro Monster and Synchro Monsters that he controls to perform a Synchro Summon. He tunes the two "Warriors", now Level 3, with the now Level 4 "Stardust Spark Dragon". Crow is shocked to learn that "Stardust Spark Dragon" is a Tuner monster, and Yusei chants, "All thoughts spun by the tracks of falling stars! Join our bonds and fill this world! Accel Synchro! Descend! True Stardust Spark Dragon Chronicle!" Leo and Luna observes the Level 10 Synchro Monster, and Akiza observes that it has wings of light too, while Sect notes its golden color. Jack comments that it's Yusei's new ace, and Yusei warns Jack that his Battle Phase hasn't ended yet; telling him to take the full force of his Sense. The 3000 ATK "True Stardust Spark Dragon Chronicle" attacks Jack directly with "Shooting Shine Blast", and Kalin cries that Jack has no monsters on his field. Crow grins that if the attack gets through, Yusei will win. Sect cheers that it's a One Turn Kill for Yusei, and Yusei grits his teeth while Jack smiles as the attack hits, causing a massive explosion.

Duel continues in the second part.