Phoenix Whirlwind, known as Wheel of Fortune (ホイール・オブ・フォーチュン Hoīru Obu Fōchun) and later Volcanic Wheel of Fortune in Japanese, is Jack Atlas's Duel Runner. It has the design of a monowheel and a detachable Duel Disk that can be used for regular ground Duels. Other than Turbo Dueling, Jack makes use of the Phoenix Whirlwind as a means of transportation.

In the manga, Rex Goodwin owns his own version of Phoenix Whirlwind, with a darker color scheme.

Jack stole the first Duel Runner built by Yusei Fudo and used it to venture into New Domino City. It got ruined in an accident and Jack later acquired the Wheel of Fortune. (In the dub, both Duel Runners were said to be the same.) 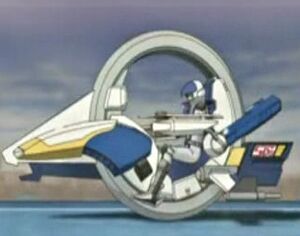 Phoenix Whirlwind, upgraded for the WRGP.

During the Fortune Cup, the Wheel of Fortune got damaged after Yusei and Jack's Turbo Duel. Later, under Rex Goodwin's orders, it got repaired and was given modifications. Jack suspected that this occurred due to Goodwin's fears concerning the power of the Dark Signers' Duel Runners.

In the dub, the name Phoenix Whirlwind is explained in two parts. The word "phoenix" comes from the mythical creature that was reborn from its ashes, in a similar manner to Jack's Duel Runner, which was repaired and improved after crashing. The word "whirlwind" symbolizes Jack's ambition to "blow" his opponents away.[1]

Before the World Racing Grand Prix, Jack got the Phoenix Whirlwind upgraded giving it a slight visual change. Using Ener-D rotary, its acceleration was increased by 150%. It had the program Yusei and Bruno developed installed and was given some new parts. With the upgrade the Duel Runner was renamed Volcanic Wheel of Fortune.[2] 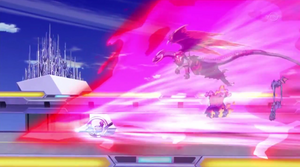 The Phoenix Whirlwind (type-FSC) HOF-01/R used by Jack in Yu-Gi-Oh! ARC-V is similar to the one used on the World Racing Grand Prix. The only difference is the Team 5D's logo missing, and instead the letter A appears on the front.[3] This version of the Phoenix Whirlwind is also capable of riding at incredible speeds which can greatly ascend it.

The Phoenix Whirlwind is briefly shown on display in the Goha Duel Museum.[4]

In Yu-Gi-Oh! 5D's Wheelie Breakers the Duel Runner can be unlocked by beating Story Mode twice.

In Yu-Gi-Oh! Duel Links, the Phoenix Whirlwind is one of the Duel Runners available for players to use in Turbo Duels, coming with its own set of EX Skills to use (by removing Speed Counters) in addition to the player's own Skill.