"Welcome to the Fortune Cup", known as "Duel of Fortune Cup Begins: Major Air Raid!! Giant Bomber Air Raid" in the Japanese version, is the fifteenth episode of Yu-Gi-Oh! 5D's. It first aired in Japan on July 9, 2008.

The Fortune Cup has now begun. The first Duel is Luna vs. Greiger. But since Luna doesn't want to participate, Leo disguises himself and Duels in her place.

Before the contestants of the Fortune Cup appear at the ceremony, Yusei, Leo, Luna, Dexter, Yanagi and Tanner prepare in a corridor. Leo, now disguised as Luna, in order to participate instead of her, asks how he looks. After getting too excited, Luna kicks him, reminding him she doesn't act like that. As Yusei and Leo depart to the ceremony, Yusei advises Leo to lose the make-up. Tanner remains silent, positive the Fortune Cup is a setup.

The MC announces the Fortune Cup is getting started, before Jack Atlas and "Red Dragon Archfiend" entertain the crowd. Jack and Red Dragon stop in the center of the stadium and the contestants rise into the stadium. The audience spots Yusei's criminal mark and begin to mutter to each other. Thoughts that Yusei may have stolen an invitation and such are spread among the crowd. Yusei's friends are uneasy, but Yusei tells Leo to pay no attention. The MC is left speechless. Greiger walks over to him and takes his microphone and asks everyone, as a duelist up there, what it is everyone sees. He points to Yusei saying he is undoubtedly a duelist, selected under the same conditions as all contestants. Having cards, marker or not, they are all the same, no one there should be ashamed of anything, he assures the crowd, it is rather them, looking at him, through their trivial rose-colored glasses that are no short of vicious. The crowd remains silent until Rex Goodwin applauds Greiger after which everyone follows. Goodwin thanks Greiger and reminds everyone of the equality of the players. The MC announces who will be in the first round as the screens randomly pair up the players. Leo is put in the first Duel against Greiger.

Rex and Lazar, now in a box room talk with Zigzix on a monitor. They will shortly have all the Signers together. Once they get them to Duel at maximum potential, it will cause the Ener-D system to respond. Zigzix has installed a number of D-Sensors throughout the stadium, which will apprehend a full account of a Signer's response heightened by the Dueling.

As the contestants prepare, Leo tells Yusei to meet him in the finals and recollects on what Yusei told him after their duel. 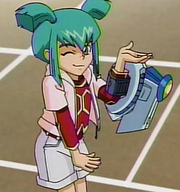 The MC announces the contestants Luna and Greiger. As Leo and Greiger shake hands, Leo tells Greiger that he liked his speech earlier. Greiger says that he heard Luna was a girl, he seems like a boy to him. Leo stumbles back laughing protecting his disguise saying people think he's a boy, but he'd say he's girl enough as he strikes a more feminine posture. In the crowd, Luna gets angered, saying that she doesn't act like that.

Leo acts out of character as Luna.

Leo gets excited as he duels, much to Luna's dismay. Greiger wishes his opponent to put up a good fight, even defeat him with the "Power of the dragon." Zigzix is unable to get a reading on his sensor, so he turns up the power. Luna begins to ache as he does this. While Zigzix gets no reaction on his scanners Lazar assures him they have checked that Luna is a Signer. Zigzix informs Lazar, that while he isn't getting a response from the field, he is getting a small reaction from the audience. Zigzix manages to pin point the reaction to be coming from Luna. Leo takes much damage from Greiger's card effects, but manages to pull off his combo. Leo attacks for apparent victory, but Greiger manages to remains in control and win.

After the Duel, Lazar meets with Greiger. He confirms Greiger's thought that he was dueling a boy, as he shows him paperwork revealing Luna to have a twin brother. Zigzix asks Goodwin how he is to handle the situation as Goodwin grins at the image of Luna in the audience.

"Gadget Hauler" then attacks "Trap Reactor・Y FI", but Greiger activates his face-down "Delta Reactor" to send his three monsters to the Graveyard and Special Summon "Flying Fortress SKY FIRE" (3000/2500) in Attack Position. A replay then occurs and Leo chooses not to attack. On Leo's End Phase, the effect of "Factory of 100 Machines" expires ("Gadget Hauler": 2900 → 2100/0).