"Mark of the Spider, Part 2", known in Japan as "The Truth from Seventeen Years Ago, The Hidden Trap of the Dark Signers" is the forty-sixth episode of the Yu-Gi-Oh! 5D's anime. It first aired in Japan on February 18, 2009 and in the United States on August 15, 2009.

Yusei and Roman continue their Duel. Roman pushes Yusei to despair, by revealing information about his past and putting his friends in danger.

Lowering the gain of counters[edit]

Trudge and Martha dash through the streets in search of Taka, John, and Mitch. Taka, alone in a building, worries about being separated from the other two, while John and Mitch fear for their lives as they bear witness to Yusei's Shadow Duel with Roman.

With Roman's Trap "Altar of the Bound Deity" signaling the advent of his Earthbound Immortal, Yusei makes note that he must end the Duel before it gains its 4 counters and the Immortal is Summoned.

Roman begins his turn and 1 of the fires lights up on "Altar of the Bound God" as it gains its first Earthbound Immortal Counter. Roman Summons "Grand Spider" in Defense Mode. Yusei becomes anxious as the number of Defense Mode monsters dictates the amount of counters the Altar gains. Roman Sets 1 card in the Spell & Trap Card Zone and ends his turn.

Yusei begins his turn and analyzes the situation; he needs to lessen the amount of Roman's Defense Mode monsters, but if he does that by destroying them in battle, "Spider Web" will switch his monster to Defense Mode.

Trudge and Martha arrive at the flaming geoglyph and enter a building to get a better view. Inside they see that Yusei dueling Roman and then spot John and Mitch inside the geoglyph. Akiza calls up to Martha and Trudge to warn them that the boys will be sacrificed if the Earthbound Immortal gets Summoned. Martha starts to panic and yells at Yusei to stop playing around and save the children.

Roman begins his turn and the second flame lights up on the Altar. He compliments Yusei on stopping him getting all 4 counters this turn, but activates "Offerings to the Bound Deity", which places the final 2 counters on the Altar at the cost of half his Life Points. Roman's Life Points drop to 1700. The Shrine implodes and blasts a purple beam into the sky. Inside the beam the Earthbound Immortal heart appears and begins to beat as it sucks up the black fog. Roman explains that the black fog contains the souls of the Satellite residents, which he is now using to Summon his Immortal. 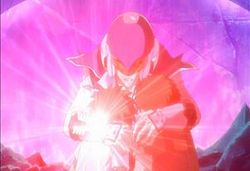 Yusei starts to sweat and looks over to John and Mitch, who begin to transfigure into purple light. As everyone starts to worry that it's too late for the boys, Jack appears on the scene on his Duel Runner. He ramps through the flames and makes his way over to the boys. He exits his Runner and puts his arms over the boys. His birthmark emits a bubble which protects the boys.

Roman calls forth his Earthbound Immortal, "Uru". A large black and glowing red spider rises up from a sea of purple flames. Uru stands behind Roman and higher than all nearby buildings. Leo, Luna, Mina and Blister appear on a nearby rooftop to witness the Duel. Jack tells Yusei to hurry up and crush the Dark Signer. (In the dub, while explaining Earthbound Immortal Uru's effect, there is a blank card that has a silhouette of "Gladiator Beast Samnite" on it.)

Roman laughs at their naivety with regards to facing an Earthbound Immortal. The Earthbound Immortal stands above all else, he says, just like the ultimate energy Ener-D. He fins it amusing to be facing none other than Dr. Fudo's son. Yusei questions Roman about how he knows his father and learns that Roman, along with his brother Rex Goodwin were his assistants at R.R.D.. Roman tells Yusei that it was Dr. Fudo who ordered the development on the Ener-D Reactor be stopped, due to the dangers associated with its negative rotations. Their sponsors and New Domino wouldn't allow that and placed Roman in charge of the project. After that, the Zero Reverse happened. Yusei asks Roman if he intentionally set off that explosion. Roman laughs and replies "who knows". Yusei loses his patience and demands Roman to answer why he did it and what went on between Roman, Goodwin and his father. 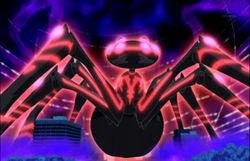 "Uru" attacks Yusei, using its "Hell Thread" attack, which Roman believes will finish Yusei off. However Yusei activates his Trap, "Iron Resolve", paying half his Life Points to reduce the damage from the attack to 0 and end the Battle Phase. Roman Sets 1 card in is Spell & Trap Card Zone and ends his turn.

The building Martha and Trudge are in begins to shake. Trudge grabs Martha before she falls over and hears Taka cry out overhead. The two of them make their way up to the roof, where they find Taka.

The rooftop slopes down, with Taka on the lower end and Trudge and Martha at the higher part. Martha begins to climb down and makes her way to the boy. Taka apologizes, but Martha says its okay, as he must be brave in order to join Security. Trudge reaches out his hand and helps Taka into the doorway, but Martha slips and slides to the other end of the roof. She tries to climb back up, but slides down again. She shakes her head and smiles realizing that she can't escape. Trudge tells her not to give up, but Martha calls back, telling him to take care of Takuya, he is his hero after all. Trudge admits that he's no hero as he would often insult people from Satellite. 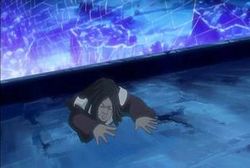 Martha falls back after saving Taka.

Yusei and Jack call up to Martha. She shouts down to them that have been such good boys and she's sure that they will build the bridge between the city and Satellite. She then slides down and falls off the edge of the building. Before hitting the ground, her body transfigures into a blob of light, which is sucked into the Earthbound Immortal.

Trudge and Taka begin to slip down the roof, prompting everyone to tell Yusei to hurry up and win the Duel. Roman laughs that this in incredibly delightful. Enraged, Yusei says he can never forgive Roman and begins his turn.

Yusei Summons "Junk Synchron" and uses its effect to revive "Turbo Booster". Tuning "Junk Synchron" and "Turret Warrior", he Synchro Summons "Stardust Dragon". Roman teases the lower ATK of "Stardust Dragon", but with the wishes of his friends and Martha hanging in this Duel, Yusei swears he'll defeat Roman. Since the effect of "Uru" disallows it being selected as an attack target, Yusei can attack Roman directly. With its "Shooting Sonic" attack, "Stardust Dragon" attacks Roman. Roman activates "Spider Egg", negating the attack and Special Summoning 3 "Spider Tokens". Yusei Sets a card in his Spell & Trap Card Zone and ends his turn.

On the rooftop, Trudge manages to make it back to the doorway with Taka and reports to Yusei. Yusei nods and turns to Roman, saying all that's left now is to defeat him.

Roman laughs and changes into a purple glow, as he replaces himself with Rally. Rally stands motionless, bearing the spider dark mark and holding Roman's Duel Disk. Yusei starts to run over to Rally, but is stopped as he hears Roman laughing. He looks up and sees Roman standing on top of the web from "Spider Web". Roman remarks how it is ironic that another friend Yusei must save was here. Yusei damns Roman for controlling Rally. However, Roman says that Rally's will is free and he may fight if he wants to fight and lose if he wants to lose, but surrendering is not an option. 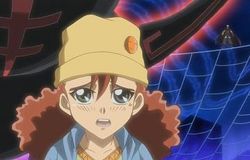 Rally's free will is returned and he informs Yusei that the loser of the Duel will disappear. He says that Nervin, Tank and Blitz are all gone and it's the Dark Signers' fault.

Rally draws as he begins his turn, dueling in Roman's place. Yusei tries to stop him, but Roman laughs and tells Rally to fight, so he can survive. Using "Uru'" effect, Rally Releases 1 "Spider Token" to take control of "Turbo Booster". He then Summons "Turbo Rocket". Yusei catches on to what Rally is doing and tells Rally to stop and attack him. Rally says he can't attack him, as Yusei is the hope of Satellite. Tuning "Turbo Booster" and "Turbo Rocket", Rally Synchro Summons "Turbo Booster Cannon". He explains that the effect of "Turbo Cannon" destroys 1 monster and causes the controller to take damage equal to its ATK. He announces that he's using its effect to destroy "Earthbound Immortal Uru"

"Turbo Cannon" rises up and hovers across from "Uru". Using its "Final Shot" effect, "Turbo Cannon" blasts the Immortal, causing it to explode. Rally's Life Points drop to 0 and he's thrown back. Yusei races over and catches Rally. Rally tells Yusei to protect Satellite, before turning into black fog and crumbling away.

The Dark Signers confront the Signers and their companions.

Yusei screams out Rally's name, as the webs and geoglyph disappear. Leo, Luna, Jack, and Trudge dash over to him and the five Dark Signers appear overhead. Roman says that it was quite an interesting show, but this is where the battle between the Signers and Dark Signers comes to breaking point. Devack says that the battles will be decided by the stars of fate, Kalin feels the Yusei hasn't conquered his fear of Earthbound Immortals and laughs manically that there's still plenty of fear for him.

Yusei stands up and admits that he is afraid; afraid of his rage over how much he wants to beat them.

Turn 8: Rally
At this point, Roman forces Rally to take his place in the Duel. Rally draws "Turbo Rocket". Rally activates the effect of "Earthbound Immortal Uru", Tributing one monster to take control of one monster Yusei controls until the End Phase. He Tributes a "Spider Token" and takes control of "Turbo Booster". Rally Normal Summons "Turbo Rocket" (0/0) in Attack Position. Rally tunes the Level 1 "Turbo Booster" with the Level 2 "Turbo Rocket" to Synchro Summon the Level 3 "Turbo Booster Cannon" (0/0) in Attack Position. Rally's hand contains "Reload". Rally activates the effect of "Turbo Booster Cannon", destroying one face-up monster on the field and inflicting damage to its controller equal to its ATK. He destroys the 3000 ATK "Earthbound Immortal Uru" (Rally: 1700 → 0 LP).