"A Whale of a Ride, Part 1" known as "Be Resurrected! Boundary Surpassing Riding Duel" in the Japanese version, is the fifty-first episode of the Yu-Gi-Oh! 5D's anime. It first aired in Japan on March 25, 2009 and in the United States on August 28, 2009.

With Devack defeated, Roman Goodwin turns Greiger into a Dark Signer. Crow, who survived the black fog, challenges Greiger to a Duel to avenge the children who disappeared in the fog. 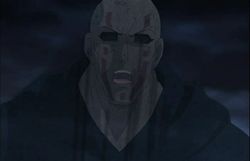 Using its "Eternal Sunshine" attack, "Ancient Fairy Dragon" emits an invigorating blast of light, causing "Cusillu" to dissolve. Devack's hood is thrown back from the blast, as his Life Points hit 0. The surrounding Monkey geoglyph fades away.

Leo compliments Luna on the victory, while she considers the fate of the Duel Monster Spirits, believing to have freed them. Devack, with pitch-black eyes and dust powering from his body slowly approaches the twins. Leo acts as a shield for his sister. Ashamed with his loss, Devack begs for Roman's forgiveness and reaches for the twins, who are pushed out his way by Yusei, before he can make contact. The Dark Signer collapses into a pile of dust, leaving the others watch in anxiety.

In the Duel Monsters Spirit World, the Monkey geoglyph disappears from the sky and the souls of the spirits return to the tablets in Zeman's castle, where they are subsequently released. Torunka understands that Luna has managed to free them and informs the spirit's of her endeavor. 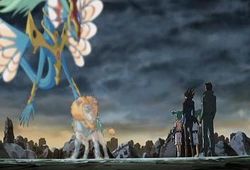 Trudge and Yusei compliment the twins on how they performed in the Duel. Ancient Fairy Dragon and Regulus appear in front of the party. Trudge, who refused to accept the existence of such spirits, believes the Solid Vision from the Duel must still be active. However Ancient Fairy Dragon speaks to him, claiming not to be an illusion, which causes Trudge to faint. 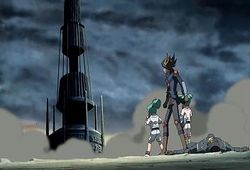 Yusei and the twins proceed into the tower that Devack was guarding. Luna inserts the "Ancient Fairy Dragon" into the control unit. An alarm goes off and the tower begins to rumble. After quickly retrieving her card, Luna hurries outside with Yusei and Leo before the doors close, where they observe as the tower sinks into the ground, leaving no trace behind.

Trudge wakes-up finding the spirits have disappeared and believes he must have been hallucinating earlier. With one tower taken down, Yusei makes plans to tackle the remaining three, starting with the Giant, where he will face Kalin.

Roman observes a lit candle from a three pronged candlestick extinguish itself, signaling Devack's defeat. Roman picks up the candlestick and exits the room, vowing to make the Signers pay.

He makes his way to a cell, where Greiger is held and calls him out. The two of them make their way to the top of the Ener-D Reactor. He receives Greiger's felony of trying to assassinate Rex Goodwin during the Fortune Cup. As punishment, Greiger is to be executed, which Roman plans to carry out himself, right now. inside the Ener-D Reactor is a swirling pool of Ener-D, which Roman says are the Doors to the Netherworld. He tells Greiger that he is now ready to die and be reborn as a Dark Signer. Greiger must first remember what he felt back when he tried to kill Goodwin in order to alite the flames of vengeance within his heart.

Reminding him of the destruction of his hometown and the alleged fate of his brother and sister and blaming it on Goodwin, fills with Greiger with his hatred for Goodwin and thirst for revenge. With these necessities fulfilled, unexpected to Greiger, Roman activates a trapdoor, causing Greiger to fall into the pool of Ener-D. 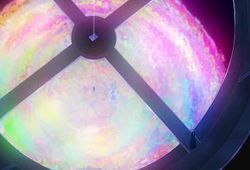 Before Greiger makes contact with the Ener-D, a spider on the ceiling shoots a web, which catches him around the neck and stops his fall, snapping his neck. With Greiger suspended there, Roman calls down to him, stating that he is giving Greiger a chance to seek his revenge, by making him a Dark Signer, who must defeat Yusei Fudo. Greiger convinces himself that he must defeat Yusei and Roman begins the process. A fountain of Ener-D rushes up, engulfing Greiger, and as Roman laughs, the Killer Whale Nazca Line briefly flashes in the sky.

As Yusei, Trudge, Leo and Luna make their way to the tower of the Giant, Greiger, follows them on his enhanced Duel Runner, The Beast, vowing to defeat Yusei and Goodwin. 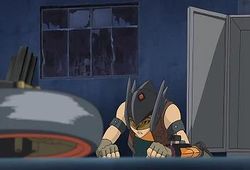 Crow emerges from the refrigerator.

Meanwhile, on the other side of Satellite, Crow emerges from a refrigerator that he had taken cover in to survive the black fog. He falls forward as he makes his way to the Blackbird and remembers what Lazar had said about running for life, before the black fog appeared. He rides the Blackbird through the streets, learning that everyone has disappeared. 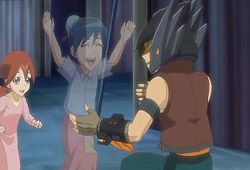 Crow imagining he sees the children.

He returns to his hideout at Daedalus Bridge and begins to hallucinate as he thinks he sees and hears the children. As he tries to touch them, he realizes that they are not there. After coming to grips with the reality, he screams out loud, before making his way to the edge of the incomplete bridge. Up there, he spots the Giant geoglyph in the sky over the B.A.D. Understanding a Dark Signer to be there, he mounts his Duel Runner and speeds off in their direction. 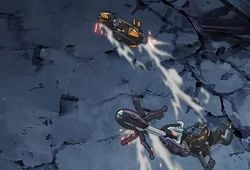 Crow pulls out in front of Greiger.

On the way, Crow spots Greiger on his Duel Runner and ramps out in front of him. The two Runners halt and Greiger shouts out, believing Crow to be Yusei (in the dub he angrily tells Crow to get out of his way). Crow states that he is not Yusei, but he knows who Greiger is and damns him for joining the Dark Signers. Greiger has not met Crow before, but Crow introduces himself and challenges Greiger to a Duel.

Greiger questions as to whether Crow is a Signer. (In the dub, Grieger knows that Crow is not a Signer.) Regardless of being a Signer or not, Crow recites his reason for challenging Greiger. Although Greiger is unsure what Crow means, Crow accuses the Dark Signers of taking away the children he took care of. The fate of the innocent children, reminds Greiger of his brother and sister. He regarded Crow's threat to make him pay as ironic, as he believes he shall make Goodwin pay for killing his siblings. He tells Crow that the fate bestowed on his siblings, caused him to seek vengeance by any means necessary, even through bloodshed. 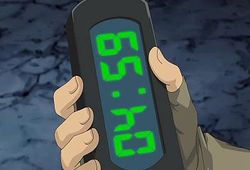 Seeing no use in arguing, Crow suggests they get on with the Duel, refusing to let Greiger face Yusei, until he has beaten him. Greiger refuses to Duel a non-Signer like Crow. However Crow attaches a timer to the Blackbird, which he says will kill both players when the timer reaches 0. (In the dub, he says it's an E.M.P. charge that will wreck Grieger's Runner.) He threatens to chase Greiger unless he accepts. Seeing Crow to be mentally prepared, he accepts the Duel in order to lure Yusei.

Greiger informs Crow that once the Shadow Duel starts, there will be no turning back and one of them will lose their soul. Crow refuses to receive concern from people who stole away the only place who could go home to. Before they begin, Crow lays down one more rule; both players turn off auto-pilot for the Duel. Remembering Yusei's encounter with Ccapac Apu, Crow infers that the only way to counter the attacks from an Earthbound Immortal is to use your own riding techniques.

"Speed World" is activated, setting-up the Turbo Duel. The Killer Whale geoglyph appears and etches out the circuit.

Yusei, Trudge and the twins see the geoglyph appear in the sky. Trudge notes that it shouldn't be there as there is no Dark Signer with a Killer Whale birthmark, sparking Yusei to worry that a new Dark Signer may have emerged. Since Luna and Yusei's birthmarks aren't reacting, they deduce that the Dark Signer's opponent isn't a Signer.

Greiger sets the rule to decide who goes first; whoever is first around the first corner. Crow chucks the timer onto the ground, explaining that it was only an alarm clock and suggests they start the race, once the timer hits 0.

Crow beats Greiger around the corner.

The timer drops to 0 and the alarm goes off. Both Runners speed off and Crow makes plans on how to get past the corner first, when his Runner has less horsepower. Crow speeds-up, prompting Greiger to go even faster. Greiger gets to the corner first, but drifts to the outmost point, due to the size of his Duel Runner, allowing Crow to easily take the inside lane and move in front of Greiger.

Crow goes first and Summons "Blackwing - Shura the Blue Flame" in Attack Position (ATK: 1800). He Sets a card and ends his turn. 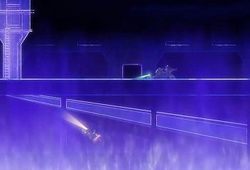 Crow is knocked off course.

Greiger draws "Diving Exploder" and Summons "Trap Reactor・Y FI" in Attack Position (ATK: 800). He discards "Diving Exploder", switching the ATK and DEF of "Shura the Blue Flame" and "Trap Reactor・Y FI", setting them at 1200 and 1800 respectively. Greiger then attacks "Shura" with "Y FI". "Y FI" shoots out "Shura", dropping Crow's Life Points to 3400. The impact from the attack, knocks Crow off course, causing his Duel Runner to sail off course and fall off the side of the highroad.

Yusei and company continue to make their way to the Killer Whale geoglyph. Yusei fears for whoever is facing the Dark Signer and hopes they don't make any hasty decisions. (In the dub, he thinks that whoever's Dueling that Dark Signer has no idea the amount of danger they're getting into, as if they come "deck-to-deck" with an Earthbound Immortal, it might be their last Duel ever.)

Leo and Luna vs. Devack[edit]

This Duel is conducted as a Turbo Duel, so at the start of the Duel, the Field Spell Card "Speed World" is activated. When a player plays a non-"Speed Spell" Spell Card, they take 2000 damage. During each player's Standby Phase after the first turn, each player places 1 Speed Counter of their own on "Speed World" (max. 12 each). Also, each time a player takes damage, they reduce their Speed Counters by 1 for every 1000 damage they took.