"A Web of Deceit, Part 1", known as "World Without Light: Dark Synchro, Frozen Fitzgerald!" in the Japanese version, is the twenty-seventh episode of the Yu-Gi-Oh! 5D's anime and the first episode of the Dark Signer arc. It first aired in Japan on October 1, 2008 and in the United States on May 16, 2009. This episode features the debut of many new game mechanics, including Dark Synchro Summoning and negative Levels. Starting with this episode, each episode of the Japanese version begins with a snippet of Leo and Luna introducing the Featured Card on a stage, with four other cards appearing in the episode alongside it.

Yusei, winner of the Fortune Cup and the appearance of the Crimson Dragon catches the interest of the media and the mysterious organization, called the Dark Signers. One of these Dark Signers challenges Yusei to a Duel.

Reactions to the Fortune Cup final[edit]

In the scrapyard, Nervin, Tank, Blitz and Rally are still in the scrapyard. Nervin rattles at a TV screen, to try and pick up the signal that they lost, after the Crimson Dragon appeared. Eventually the signal returns and they see that Yusei won and is now King. Initially they stare in shock before they begin dancing in celebration. 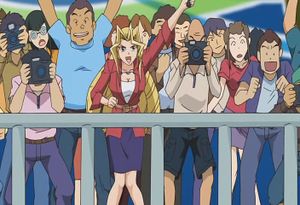 The crowd of reporters.

At the Stadium, there is mixed reactions among the audience over the new King. Carly holds a camera to her face as she stutters to announce that Yusei has just beaten Jack. Angela appears, pushing Carly aside and reports the same story, although appearing much more professional, while her own cameraman films her. Carly approaches Angela to tell her off. Angela teases Carly saying she thought she was only rehearsing and pointing out that Carly hasn't changed; she still stutters. Carly's anger builds up, but Angela takes off in search of someone to interview. Carly quickly dashes to do the same.

With members of the crowd still cheering for Yusei, Jack is taken away in a stretcher. Some of the crowd start jeering at Yusei. Not trusting him for being from Satellite and having a criminal mark, they start suspect he was up to no good, resulting in Jack's injury.

Tanner, Yanagi and Leo rush to Yusei to warn him to get out, before the large crowd of reporters are let near him.

Lazar is shocked and confused over the unplanned circumstances with Jack losing and Yusei becoming the new King. he asks Goodwin if he plans letting Yusei get away with this. Goodwin responds calmly that the stars have started to move in anticipation for when they unify as one.

Yusei and his companions in the tunnel.

The reporters search around, but Yusei appears to have vanished.

Meanwhile Bolt, Dexter, Yusei, Luna, Leo and Yanagi pass through an underground tunnel, wheeling Yusei's Duel Runner alongside them. Himuro details them in on how the tunnel was made back when the stadium was being built, but nobody uses it anymore. Blister had told him about it.

While some of the gang begin to celebrate some more, over Yusei becoming King, but Bolt is suspicious that the tournament organizers are up to something, since they kidnapped Yusei's friends. Whatever the situation he feels it's best they all lay low at Blister's hideout.

Luna expresses her concern, telling Yusei that she had fully seen his Duel with Jack and saw the destruction of Satellite. Neither of them are unsure of what it was that was causing the mayhem, but Yusei feels he must stop it. Luna then asks what a Signer is anyway. Yanagi sees this as his cue and steps in to explain.

The multitude of reporters wait outside a room guarded by a number of Securities to question Goodwin. Carly tries to avoid being nervous and pulls out her Fortune Telling Deck. She draws the card "Fortune Fairy Hikari". Judging by the card, her fortune for today is "super happy" and "Straight ahead is the only way. All of your wishes will come true".

Goodwin and Lazar emerge from the room. The reporters begin to ask what happened in the Duel and what was the Crimson Dragon. Angela asks if Jack really lost; some fans aren't taking that too well. Goodwin describes the unusual behavior during the Duel as a glitch in the Solid Vision and that a report on all details of the Duel, will be given tomorrow. Angela asks what Goodwin can tell them about Yusei. Goodwin replies that all he knows is that he was born in Satellite.

Carly is unable to get noticed due to her position in the crowd, so she drops to the floor and crawls forward keeping in mind her fortune from the card. She pops up in front of Angela, cutting off her question, as she surfaces. Carly mentions to Goodwin how it looked like Yusei's arm was glowing after the Crimson Dragon appeared and asks if that was of any significance. Goodwin is put off by the question, but replies that 'perhaps the sheen of Yusei's Duel Runner' was reflecting the sunlight into Carly's eyes, but she remains adamant about what she saw. Angela pulls Carly aside to tell her off for asking off topic questions.

Lazar alerts the crowd, that they shall now end all questioning. The Securities hold the crowd to the sides while Goodwin and Lazar pass. Goodwin glares at Carly as he passes her.

With neither Yusei or Goodwin available for interviewing, the reporters leave for Jack. Carly chases after them remembering straight ahead is the only way for her, but she slips and falls back, losing her shoe in the process.

Carly in her car.

While in her car, which is on auto-pilot, Carly is contacted by her chief, who is not pleased over her failure to interview Yusei. He tells her to get her ass in gear or she's fired, but Carly promises she'll get a scoop and tells him to keep the front page open.

Carly watches over a clip of Yusei, just before the Crimson Dragon appears and spots the birthmark glowing on his arm. She deduces that Goodwin was playing dumb and there is a connection between to the glowing arm and the Crimson Dragon.

Her radar then picks up the signal of a Duel Disk. Looking to her left she sees a group of people watching a Duel in a yard. She comments that there are many stars in the streets that don't get rewarded; just like her; but she won't go back on the streets, since she won't let this chance slip. But her engine stalls.

A group of 3 Dark Signers sit together in a dimly lit room, illuminated only by a candlestick. With the Signers gathered together after 5000 years, they may begin their battle. The leader opens his hand, setting two spiders free, which climb onto a chandelier.

Luna suddenly passes out after Leo checks himself for a birthmark, but finds nothing. Yanagi catches her and the others rush over. She immediately wakes up and insists that she's fine, just a little tired.

Mina paces around outside Jack's room at the hospital. Meanwhile outside a number of reporters are refused entry as no visitors are allowed. Carly stops next to them in her car, but then drives on reciting that straight ahead is the only way for her.

Three Dark Signers stand on a monument in front of a small crowd of spectators. They preach that the Crimson Dragon has appeared to spread despair across the land in search of crimson blood; they invite the crowd to join them to stop the Crimson Dragon. Small spiders descend on silk strings onto a number of the watchers from a large spider web above them.

At Blister's hideout, Yusei's arm begins to throb, but unlike before. This time it feels like it's gouging into him. He walks over to the window and spots a cloaked man with a glowing purple birthmark, similar to the spider that tore up Satellite. Assuming him to be a Signer, Yusei rushes out to him. The man flees down an alley, leading Yusei to a car park. Yusei asks him what's going to happen to Satellite. The cloaked figure imposes a Shadow Duel. Yusei accepts, hoping he can use it to get info out of him. The two players are surrounded by a circular wall of purple light.

Carly picks up a strong reading on her Duel Radar in her car, she spots the light in the car park, where Yusei and the Dark Signer are dueling.

As Yusei continues the Duel, he notices the cards are inflicting real damage, just like Akiza's powers. Yusei's opponent brings out a Dark Tuner monster and surprises Yusei as he performs a Dark Synchro Summon and Summons a monster with a negative Level, "Frozen Fitzgerald".

Carly gets out of her car and leaps over a fence before dashing into the car park in the direction of the Duel.

Turn 2: Yusei
Yusei draws "Tuning". Yusei activates the Spell Card "Tuning", adding a Tuner monster from his Deck to his hand, then sending card from the top of his Deck to the Graveyard equal to the added monster's Level. Yusei adds the Level 3 "Junk Synchron" from his Deck to his hand and sends "Speed Warrior", "Healing Wave Generator" and "Equip Shot" to the Graveyard. Yusei Normal Summons "Junk Synchron" (1300/500) in Attack Position. As "Junk Synchron" was Normal Summoned, Yusei activates its effect, Special Summoning a Level 2 or lower monster from his Graveyard in Defense Position with its effects negated. He Special Summons the Level 2 "Speed Warrior" (900/400) from his Graveyard in Defense Position. Yusei tunes the Level 3 "Junk Synchron" with the Level 2 "Speed Warrior" to Synchro Summon the Level 5 "Junk Warrior" (2300/1300) in Attack Position. "Junk Warrior" attacks and destroys "Blizzard Lizard". As "Blizzard Lizard" was destroyed by battle, Grady activates its effect, inflicting 300 damage to Yusei (Yusei: 4000 → 3700 LP). Yusei Sets two cards.

Grady Tributes two "Blizzard Lizards" to Tribute Summon "Dark Tuner Catastrogue" (0/0) in Attack Position (0/0). Because the "Blizzard Lizard" that was summoned via "Call of the Haunted" has been removed from the field, "Call of the Haunted" is destroyed.[Notes 1] Grady then dark tunes the Level 3 "Blizzard Lizard" with the Level 8 "Dark Tuner Catastrogue" to Dark Synchro Summon the Level -5 "Frozen Fitzgerald" (2500/2500) in Attack Position. Grady's hand contains "De-Synchro" and "Pot of Avarice". Yusei's Set cards are "Descending Lost Star" and "Graceful Revival".