From Yugipedia
(Redirected from Blitz)
Jump to: navigation, search
"Blitz" redirects here. For the character whose Japanese name is Blitz, see Nervin. 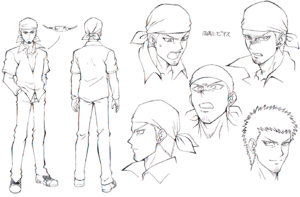 Blitz, Nervin and Tank are first seen watching the Turbo Duel between Jack Atlas and Hunter Pace, before Yusei comes in to work on his Duel Runner. Shortly afterwards, when Rally Dawson comes to give Yusei a chip for his Duel Runner, he recognizes it as a new chip and asks Rally where he got it.

Blitz, Tank and Nervin are later provoked into a fight by Lenny and his gang.

After Yusei's Duel with Kalin Kessler, he and the others go and see Yusei to make sure he's alright, and find out by turning him over, that he sees a large metal shard impaled into his stomach. After their friend Crow Hogan takes Yusei away to get medical treatment, Blitz, Tank, Nervin, and Rally take Yusei's practically demolished Duel Runnner out of the B.A.D. area, but run into some trouble along the way. Luckily, Blister finds and saves them. They later go to where Yusei is being treated. When the black cloud that envelopes satellite comes he disappears. It is later found out from Rally that he was sacrificed to an "Earthbound Immortal". During Yusei and Roman's second Duel ends, he and all other people from Satellite sacrificed during the Summon of "Earthbound Immortal Uru" are revived. 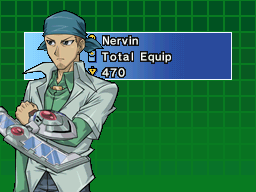 Nervin appears as a supporting character and opponent in World Championship 2009: Stardust Accelerator.

He has to be dueled in order to be able to enter Yusei's hideout. 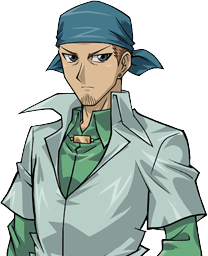 Nervin can be found in Satellite. The first time the player talks to him each day, he will give the player an item or a small amount of DP.

Nervin appears as a supporting character and optional opponent in Duel Transer.