The two hippies were flying over the Nazca Lines when the spider lines disappeared. They were later interviewed on television about what happened.[1]

Later, the hippies were seen driving behind Jack Atlas and the Fake Jack Atlas. Jack flipped his Duel Runner over their car to avoid crashing into them.[2] The next day they met Carly and told her that they had seen two Phoenix Whirlwinds that night and showed her photos, which Carly was able to use as evidence against crimes Jack was accused of committing.[3]

She and her partner ate at Cafe la Geen once. Her partner tried ordering food, but the waitress, Stephanie ignored him in favor of serving and staring at Jack Atlas.[4] 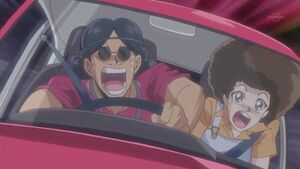 The hippies swerving to avoid Yusei and Aporia.

When Yusei Fudo Turbo Dueled Aporia in the World Racing Grand Prix, the two hippies were driving on the road near the race track, just before Aporia broke the track, forcing him and Yusei to continue the Duel on the normal roads. They nearly hit the hippies, but the male hippie swerved the car away from them, crashing into a wall.[5]

As New Domino City was evacuated while the Divine Temple descended, she was caught in a squeezed crowd and ended-up knocking over Carly Carmine as she fell on top of her.[6]