From Yugipedia
Jump to: navigation, search
For other versions of this character, see Mr. Armstrong (disambiguation).

Armstrong, known as Takasu in the Japanese version, is the Chief of The Facility and an antagonist. He is a large, overwhelming man with a cruel personality and a particularly loud, booming voice. He seems to have large, muscular arms but also a thick, fat, and slightly jutting/overhanging belly, giving him a generally bulky and stocky overall appearance. He is noticeably uncouth as well; one of his favorite interrogation techniques is to pull out his own nose hair and blow it into his victim's face (this is edited in the dub, where he simply has foul breath, presumably due to his huge appetite). He is devoted to Goodwin, and often serves as his bodyguard when he visits the prison. 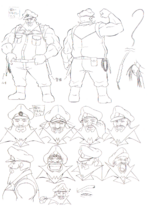 Mr. Armstrong is a dark skinned male with brown eyes and a bald head which is covered by a Sector Security cap. He also has a large, pointed black beard. Mr. Armstrong's most notable features are his height and weight, both of which make him one of the largest characters in the series. His weight problems are made more evident in the English adaptation as he warns Yusei to not make him miss his lunch due to his blood sugar levels. His outfit consists of a dark green Sector Security uniform with the sleeves rolled up to his shoulders, a black belt with a rope and Deck box attached. He also wears brown arm bands that extend from his wrists to his elbows.

Mr. Armstrong is a tyrant who runs The Facility with an iron fist to the extent that he abuses his power, finding amusement in torturing the inmates as well as framing them for crimes they didn't commit. When upset enough he is willing to even go against Rex Goodwin's orders (which was to only keep observing Yusei. In the dub however he doesn't go against Rex Goodwin's order; for Rex Goodwin ordered him to set up a situation so Yusei would Duel him). He also holds a great deal of hatred towards Yusei, as he believes someone from Satellite isn't worthy of being a Signer.[1]

He is also shown to be a sadist as he thoroughly enjoyed torturing Yusei for information about his Signer birthmark as well as finding pleasure in pulling out his nose hair and blowing it into the inmates' faces.[2] In the original, Mr. Armstrong refers to himself using the honorific ore-sama; the rough translation of this in English would be "My honorable self". Like other characters seen early on in the series, he looks down on residents from Satellite, referring to them as "trash".

Mr. Armstrong is also shown to be cunning and devious as during his Duel with Yusei, he rigs the chain attached to his Duel Disk to prevent the electric current from electrocuting him. In addition, he utilizes the cameras around The Facility to gain information about the cards in Yusei's hand and field.[3]

After Yusei Fudo is admitted to The Facility, Rex Goodwin inquired that Armstrong keep an eye on Yusei as he's a potential Signer.[1] Armstrong observed Yusei's Duel with Bolt Tanner and informed Rex Goodwin about it.[4]

After the Duel, Armstrong had the majority of inmates transferred to a ward where their time is extended to a minimum of six months. In order to acquire information on Yusei, he framed Bolt for concealing a switchblade, which he used as an excuse to drag him to an interrogation room where despite his best efforts, Bolt refused to sell out his friend. Because of this, Armstrong beat Bolt up and informed the other inmates that because of his "crime", they all lost privileges to leaving their cells for one year. With this, the inmates display their annoyance to which Armstrong insulted them, stating that they're all unneeded. Hearing this, Yusei defended his fellow inmates to which Armstrong proposed a Duel where if Yusei wins, the inmates will be allowed their free time back and Bolt's "crime" will be overlooked, but if Yusei loses, he'd be at Armstrong's mercy for the rest of his life. Armstrong then has Yanagi's Deck confiscated so that Yusei wouldn't have access to any cards, meaning he'd lose his end of the bargain. However he was shocked when Yusei revealed he had acquired a Deck consisting of the various inmate's favourite cards. Armstrong then forces Yusei into a Duel where if they take damage, they recieve an electric shock. However, when Yusei managed to inflict damage to Armstrong, he joked that his Duel Disk was broken, when in fact he rigged it so that the electric current wouldn't flow to him.[1]

As the Duel continued, Armstrong began to destroy Yusei's Deck, joking that the cards that belonged to the inmates belong in the trash. He also utilized the various cameras located around the duel field to spy on Yusei's hand and field. Yusei eventually came to know of this and used a power outage caused by Alex's friends to conceal a card in his hand up his sleeve as well as switch his Set cards. As Yusei gained an advantage, the electric current shocked Armstrong. Alex is then caught and reveals that instead of escaping, he used the opportunity to sabotage the machine that prevented the current from hitting Armstrong. Despite managing to Synchro Summon "Iron Chain Dragon" and reduce Yusei's Deck to zero, he lost after Yusei used the card he concealed to defeat Armstrong. Despite losing, Armstrong attempted to lock Yusei back up, backing out of his end of the bargain. However, Rex stopped him, revealing that he watched the Duel and was disappointed in Armstrong, telling him to leave (in the dub Goodwin fired him as a result for abusing his position).[3]