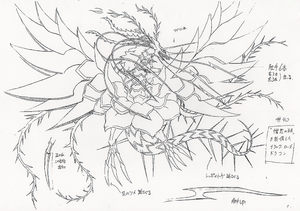 Black Rose Dragon is a black-skinned wyvern with magenta claws and plate edges. Its tail and neck are covered in overlapping plates of petal-shaped armor, and its body is surrounded a large rose with magenta petals. It large wings are made up of overlapping folded petals. Black Rose Dragon has a triangular head with large pink eyes and long, needle-like teeth. Three petal-covered strands extend from the back of its head, and it has four black, thorn-lined vines extending from its hips. When equipped with "Thorn of Malice", the thorns on its tail and vines become longer, and it sprouts bladed whips from its throat.

10,000 years ago, Black Rose Dragon fought alongside the Crimson Dragon and the other Signer Dragons in the battle against Red Nova.

5,000 years later, Black Rose Dragon served the Crimson Dragon and fought alongside him and the other Dragons in the battle against the Earthbound Immortals.

Akiza often materialized Black Rose Dragon through her psychic powers and used it to terrorize people at Daimon Area.

When Akiza faced Gill Randsborg in Fortune Cup, Greiger called Black Rose Dragon a creature of ill omen that brings forth ruin and destruction, as Akiza Summoned it and used it to severely injure Randsborg.[1]

In Akiza's Fortune Cup Duel against Commander Koda, Akiza became enraged when Koda called her a monster rejected by her parents, causing her to use Black Rose Dragon to viciously attack him.[2]

On board the Divine Temple, Black Rose Dragon saved Akiza, Sherry, and Crow from being crushed by Sherry's collapsing "Soul Binding Gate". Afterwards it healed the trio which led Crow to believe that true Psychic powers can also heal, not just cause destruction.[4]