"Signs of Doom, Part 2", known as "The Strongest Earthbound God! Wiraqocha Rasca" in the Japanese version, is the sixty-third episode of the Yu-Gi-Oh! 5D's anime. It first aired in Japan on June 17, 2009 and in the United States on March 17, 2010.

The Duel between Yusei, Jack, Crow, and Rex Goodwin continues. Rex Summons "Earthbound Immortal Wiraqocha Rasca" and uses its effect to reduce Crow's Life Points to 1. Due to massive injuries, Crow is unable to continue the Duel after falling off his Duel Runner.

Angela reporting on the scene.

Angela Raines stands outside the Stairway to the Dragon Star, which is now surrounded by Sector Security, as she reports on recent happenings. The light in the form of the Condor Nazca Line appeared over Goodwin's mansion at about 11:47, she explains. Due to the purple flames surrounding the outside, they can't get any inside coverage. However she believes this could be connected to the similar events at the Arcadia Movement building, while Sector Security has released no information.

Goodwin tells his opponents how he, a once ordinary man, is now an ultimate God through the powers of the Crimson Dragon and the Earthbound Immortals. The Marks of the Dragon disappears from the Signers' arms and forms the complete dragon symbol on Goodwin's chest.

The King of the Netherworld continues to make its way to the geoglyph, while Goodwin talks about fate and his opponents' companions watch anxiously from the sidelines.

Jack pulls up in front of his two partners to make his move, saying he doesn't know much about God and bonds and wish to surpass them. It's Jack's turn and he draws a card. Yusei and Jack's SPC go to 5 and Crow and Rex's SPC go to 3. Jack Sets a card in the Spell & Trap Card Zone and Summons "Magic Hole Golem" with 2000 DEF. The effect of "Magic Hole Golem" allows Jack to attack Goodwin directly with "Mad Archfiend", whose ATK must be halved. The ATK of "Mad Archfiend" drops to 900 and it leaps up to Goodwin, showering him with its "Bone Splash" attack. Goodwin's Life Points drop to 7900.

Crow tells Jack to not joke around and adds that Jack can't get rid of their bonds that easily. Crow activates his face-down "Shadow Dance", inflicting a further 1000 damage to Goodwin, lowering his Life Points to 6900 and SPC to 2. Yusei holds his hand over his heart as he talks about the bonds of a Signer and their friends. He activates his face-down; "Rising Rush", Special Summoning "Junk Synchron" with 1300 ATK. Jack ends his turn, allowing Yusei to take charge.

Yusei begins his turn. His and Jack's SPC go to 6, Crow's goes to 4 and Goodwin's SPC goes to 3. Yusei Tunes "Junk Synchron" and "Max Warrior" to Synchro Summon "Junk Archer" with 2300 ATK. "Junk Archer" takes aim, as Yusei uses its effect. It fires an arrow through "Moon Dragon Quilla", removing it from play. Yusei attacks Goodwin directly with "Junk Archer", but Goodwin activates "Offering to the Immortals", which negated the attack, Summoned 2 "Ceremonial Tokens", and lets him add an "Earthbound Immortal" from his Deck to his hand. His opponent's realize what he's doing. Goodwin laughs and shows them the "Earthbound Immortal Wiraqocha Rasca" card. Crow accuses him of playing dirty. Yusei Sets 2 cards in the Spell & Trap Card Zone, ending his turn. "Moon Dragon Quilla" returns during the End Phase.

The Signers' friends continue to watch anxiously and Luna and Akiza worry for Yusei. 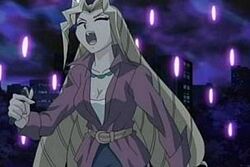 Black Rose Dragon saves Yusei by taking out one of the condors.

Goodwin begins his turn. Yusei and Jack's SPC go to 7, Crow's goes to 5 and Goodwin's goes to 4. Goodwin Releases his 2 monsters, causing the Earthbound Immortal heart to appear in the sky. The heart sucks people in the vicinity into it, including Angela and members of Sector Security. A flash of light appears around the heart and it becomes the condor, "Earthbound Immortal Wiraqocha Rasca". It spreads its wings and hovers over the stairway, standing with just a single ATK point. Yusei, Jack and Crow worriedly look up, but direct their attention to a noise coming from the King of the Netherworld. The King spots Wiraqocha Rasca and launches an army of smaller condors from its body in the direction of "Wiraqocha Rasca". The condors circle the Duel circuit. Rex laughs in triumph as his plan reaches its climax. As one of the small condors sneaks up on Yusei, it gets struck by Black Rose Dragon. Black Rose Dragon and Ancient Fairy Dragon, summoned by Akiza and Luna to fight off the condors. Kuribon appears next to Luna, while Leo, Mina and Trudge cheer on Yusei, Jack and Crow respectively. Following some speech from Yusei about bonds and friendship surpassing fate, Goodwin continues his turn and activates the effect of "Wiraqocha Rasca". 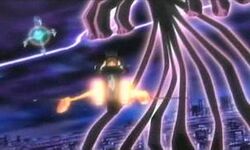 Crow takes the lead, telling Goodwin how he had looked up to the Legendary man from the Daedalus Bridge legend and how he taught them to be strong and to never give up. Yusei is touched by Crow's speech. One of the smaller condors strikes Crow, causing to slightly deviate off course, but does no major damage. Crow, determine to protect Yusei's wish, chains "Life Exchange" to the effect of "Wiraqocha Rasca", forcing the Immortal to attack him. The massive blast throws Crow off the geoglyph and drops his Life Points to 1. Crow switches the Blackbird to flight mode, mimicking the legendary man and flies through "Moon Dragon Quilla", who gets destroyed by "Life Exchange". With "Quilla" gone, "Sun Dragon Inti" returns with 3000 ATK. Crow activates "Blackwing Anchor", releasing "Blackwing Armor Master". He lands back on the circuit, causing damage to the Blackbird, which he falls off of. Goodwin teases Crow about the legendary man and Sets a card in his Spell & Trap Card Zone, ending his turn.

Crow falls from his Duel Runner.

Crow looks up ahead at the Blackbird. He still has 1 Life Point and the card "Blackwing Anchor" continues to flash on the monitor of the Duel Runner. He collapses on the field and is excluded from the Duel after saying that their bonds haven't been broken yet.

Furious about what Goodwin has done to Crow, Jack begins his turn. Yusei and Jack's SPC go to 8 and Goodwin's goes to 5. As Jack begins his turn, the screen displaying the players stats no longer mentions Crow. Jack Summons "Sinister Sprocket" and Tunes it with "Magic Hole Golem" and "Mad Archfiend" to Synchro Summon "Red Dragon Archfiend". He activates "Half Straight", halving the ATK of "Red Dragon Archfiend" and causing that monster to attack the opponent directly if they have a monster with a higher ATK. Jack then declares a direct attack against Goodwin, however Goodwin uses the effect of "Sun Dragon Inti" to reduce its own ATK to 0, meaning "Red Dragon Archfiend" would not be able to attack directly, as no longer has the lower ATK. Since "Wiraqocha Rasca" cannot be selected as an attack target, "Red Dragon Archfiend" can only attack "Inti" which would cause both to be destroyed, but Yusei activates "Scrubbed Raid", ending the Battle Phase. Goodwin advises Jack to take the path of a true king, while Yusei talks him into acting otherwise. Jack reflects on how he betrayed his friends to become King. Goodwin offers further persuasion and orders him to eliminate Yusei. Jack refuses and continues the attack of "Red Dragon Archfiend", destroying "Inti". Goodwin's Life Points drop to 5400 and due to the effect of "Sun Dragon Inti", Jack's drop to 2500. 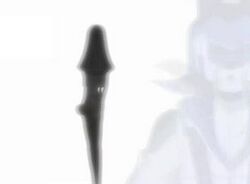 Jack and Goodwin's SPC go down to 7 and 4 respectively. During the End Phase, "Quilla" is revived. Jack Sets a card in his Spell & Trap Card Zone, ending his turn. Goodwin questions Jack's decision. As Jack replies, he thinks of Carly, saying that it was her who taught him about love, bonds and friendship.

Yusei's starts his turn. His SPC goes to 9, Jack's goes to 8 and Goodwin's goes to 5. Yusei uses the effect of "Junk Archer", in an attempt to remove "Quilla" from play, but Goodwin activates "Destruct Potion", destroying "Quilla" and gaining Life Points equal to its ATK. Goodwin Life Points rise to 7900 and "Inti" revives in the absence of "Quilla". Goodwin boasts about how futile he made the effect of "Junk Archer" and Yusei defeatedly ends his turn. Goodwin dares Yusei and Jack to fight and defeat him and laughs malevolently about creating a new world.

This Duel is a 3-on-1 Duel. Goodwin, who was alone, started with three times the number of Life Points, 12000. Yusei, Crow and Jack each got separated fields, Decks and Life Points.

Turn 7: Yusei
During the Standby Phase, the effect of "Speed World" activates (Crow: 3 → 4 SPC; Jack: 5 → 6 SPC; Yusei: 5 → 6 SPC; Goodwin: 2 → 3 SPC). Yusei tunes the Level 4 "Max Warrior" with the Level 3 Tuner monster "Junk Synchron" to Synchro Summon the Level 7 "Junk Archer" (2300/2000) in Attack Position. Yusei's hand contains "Card of Sacrifice", "Synchro Baton", "Stardust Xiaolong", and "Scrubbed Raid". Yusei activates the effect of "Junk Archer", selecting one monster his opponent controls and removing it from play, and during the End Phase of this turn, the removed monster will be returned to the field in the same battle position. He selects and removes "Moon Dragon Quilla" from play. "Junk Archer" attacks Goodwin directly, but as Goodwin's opponent declared an attack while Goodwin controls no monsters, he activates his face-down Trap Card "Offering to the Immortals", negating the attack, Special Summoning two "Ceremonial Tokens" (0/0 for both) in Attack Position and adding an "Earthbound Immortal" card from his Deck to his hand. He adds "Earthbound Immortal Wiraqocha Rasca". Yusei Sets two cards. During Yusei's End Phase, the effect of "Junk Archer" returns "Moon Dragon Quilla" (2500/2000) to the field in Defense Position.

Turn 8: Goodwin
During the Standby Phase, the effect of "Speed World" activates (Crow: 4 → 5 SPC; Jack: 6 → 7 SPC; Yusei: 6 → 7 SPC; Goodwin: 3 → 4 SPC). Goodwin Tributes his two "Ceremonial Tokens" to Tribute Summon "Earthbound Immortal Wiraqocha Rasca" (1/1) in Attack Position. As a Field Spell Card is face-up on the field, "Wiraqocha Rasca" can attack Goodwin's opponents directly, it cannot be attacked by his opponents monsters, it is unaffected by Spell and Trap Cards, and once per turn, Goodwin can skip his Battle Phase to make his opponent's LP become 1. Goodwin activates the last effect of "Earthbound Immortal Wiraqocha Rasca", choosing to make Yusei's Life Points become 1, but as Life Points would change due to a card effect, Crow activates his face-down Trap Card "Life Exchange", applying that change to his Life Points instead, then depending on whether his LP increase or decrease, Crow can either inflict 1000 damage to his opponent or destroy one monster his opponent controls respectively (Crow: 1800 → 1 LP). As Crow's Life Points decreased, he activates the last effect of "Life Exchange", destroying "Moon Dragon Quilla". As "Moon Dragon Quilla" was destroyed and sent to Goodwin's Graveyard, he activates its first effect, Special Summoning "Sun Dragon Inti" from his Graveyard. He Special Summons "Inti" (3000/2800) in Attack Position. Crow activates his face-down Trap Card "Blackwing Anchor", Tributing a "Blackwing" monster. Crow can now send "Blackwing Anchor" to the Graveyard to increase the ATK of a Synchro Monster by the original ATK of the Tributed monster until the End Phase. He Tributes "Blackwing Armor Master". At this point, Crow crashes and becomes too injured to continue the Duel. Goodwin Sets a card.